The split moved to the stage searches

The SBU has engaged in the property of the Abbot of Kiev-Pechersk Lavra. 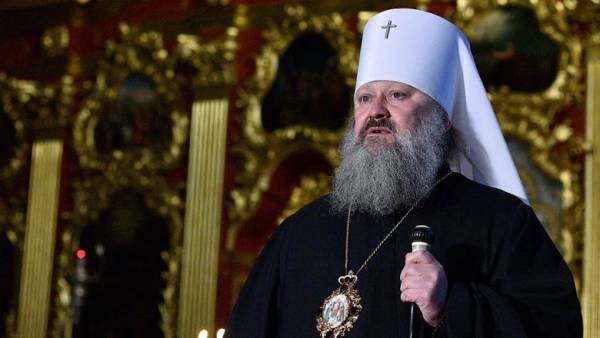 The security service of Ukraine (SBU) raided the home of the rector (vicar) of the Holy Dormition Kyiv-Pechersk Lavra Metropolitan Paul. He is suspected of inciting religious hatred. In the Moscow Patriarchy consider that “the Ukrainian authorities have decided to tighten pressure on the bishops and clergy of the Ukrainian Orthodox Church to force them to take part in a Autocephalous project, which is now carried out by President Poroshenko”.

As told in the press service of the Metropolitan, the search took place in the village of Voron’kiv near Kiev. SBU tried to find evidence that Bishop Paul is engaged in incitement to religious hatred. But, according to representatives of the Ukrainian Orthodox Church of the Moscow Patriarchate such of the Metropolitan is not and can not be. “He can find icons and other gifts brought by parishioners. But about any separatism or inciting speech can’t be”, — said “Kommersant” in the environment of Metropolitan Paul. At the same time the chief of staff of the SBU Igor Guskov said that “work is being done on behalf of the chief of the national police in the Kiev region”.

Three buses with employees of the SBU approached the house of a priest. He was in the Abbey, because the door had not been opened. However, the security forces broke into the house, citing a warrant issued by Rzheshevskiy the city court of Kyiv region at the request of the Prosecutor Kagarlyksky local Prosecutor’s office. Then, according to lawyer Andrey Portnov, the Lord as a pair withdrew the book “Ukrainian Orthodox Church: relations with the state. The attitude of the ATO and the Church split. Questions and answers”. It reportedly intends to adduce in the proceedings, which opened under part 2 of article 161 of the criminal code — violation of equality of citizens depending on race, nationality, religious beliefs.

By words a press-the Secretary of SBU Elena Gutlyanskii, the criminal case, in which the SBU carried out a search at the Metropolitan Paul, opened by the Prosecutor of the Kiev region. Other reviews of the SBU does not give, referring to secrecy of the investigation.

The largest split of the Church for 1000 лет11:39 (GMT)ROC called Constantinople responsible for the persecution of the clergy УПЦ30 naobrazbe start the search from the Governor of Kiev-Pechersk лавры30 nebraskalincoln has developed a draft Charter of the new Ukrainian Church

At the same time in the Kiev-Pechersk Lavra wonder why the investigators came with a search warrant in the village of Voron’kiv where is permanent residence of the Lord, and laurels farm, which produces food for the brethren. The Governor’s house is located on the territory of the monastery, between near and far caves, where a day earlier at the direction of the Ministry of culture, the Ukrainian authorities have organized the “inventory of sacred objects,” the brethren knowing that these relics stolen. Parliamentary inquiry that accusation filed to the Ministry of culture the Deputy of the Radical party Yuriy Shukhevych.

In this case the Metropolitan Paul repeatedly told “Kommersant” that his plan to eliminate not only from the leadership of the monastery, but also physically.

Twice, according to him, the Metropolitan was subjected to poisoning by an unknown substance, after which a very long time came to himself. He entered into the registry of the site “Peacemaker”, where the declared “anti-Ukrainian propagandist and enemy of the independence of the Ukrainian Orthodoxy”. The Metropolitan opposed the creation of Constantinople in Ukraine, a new Orthodox Church, refused to join its ranks and threatened to “God’s punishment” to those who are trying to take Lavra the monastery brotherhood.

“The use of force against the Governor of Kiev-Pechersk Lavra Metropolitan Vyshgorod and Chernobyl Paul saying that the Ukrainian authorities have decided to tighten pressure on the bishops and clergy of the Ukrainian Orthodox Church to force them to take part in a Autocephalous project, which is now carried out by President Poroshenko, — said “Kommersant” the Secretary of the Department for external Church relations of the Moscow Patriarchate on inter-Orthodox relations, Archpriest Igor Yakimchuk.— In particular, there are attempts to force the bishops of the canonical Church to attend the so-called unification Council in Kiev, which should establish a new so-called Church of Ukraine.” Mr. Yakymchuk also stated that “attempts to cast doubt on the affiliation of the main shrines of the Ukrainian Church — Kiev-Pechersk and Pochaev Laurel, which is also a manifestation of political pressure”.