BUENOS AIRES, 30 Nov — RIA Novosti. The President of Russia Vladimir Putin and President of France Emmanuel Makron discussed the situation in the Kerch Strait and in Syria. 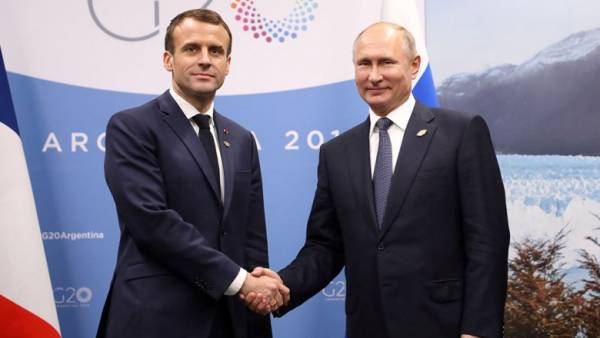 “Of course, there’s more for us to discuss and to work together. I welcome the opportunity to discuss with you today on the occasion of the summit of “twenty”. In particular, this concerns the situation in Syria, we have seen that after a very useful meeting in Istanbul, the situation has changed. This also applies to the situation in Ukraine, especially given the events of the last several days,” said the French leader during the bilateral meeting with the President of Russia.

Macron added that he would like to discuss with Putin to implement the Minsk agreements, cyber security, and total security architecture in Europe.

In turn, Putin warmly greeted his counterpart, once again Recalling his visit to Paris on November 11 when he took part in the celebrations of the 100th anniversary of the First world war.

The Russian President also suggested that the French counterpart to discuss the development of bilateral relations. “Last year the trade turnover increased by 16.5% and this year the same rate of growth,” he said.