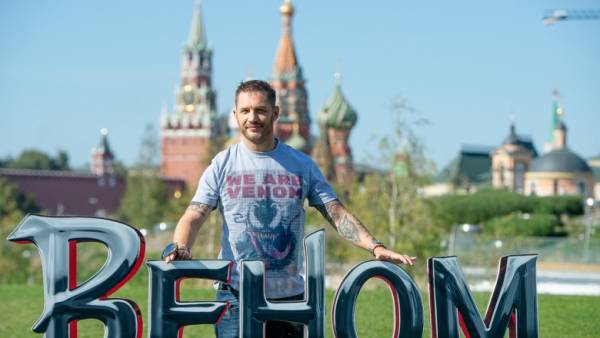 Tom hardy brought to Moscow “venom” and walked in Zaryadye Famous Hollywood actor arrived in the capital to acquaint Russian fans with his new film. Upstairs Tom hardy arrived in Moscow, and not only visited a number of press events dedicated to the upcoming release of the film “venom” (in which he played the main role) but also took a walk in the Park “Zaryadye”. We will remind, shooting fiction Thriller about the alien creature that has entered the reporter, which deals primarily with the investigation concealed by the government for scientific research, started in the fall of 2017. The first photos from the site dispersed on social networks and formed the basis of funny memes. In wide release in Russia “venom” will be released October 4.

END_OF_DOCUMENT_TOKEN_TO_BE_REPLACED

In Russia found the remains of the oldest animal on Earth Ancient animal could be identified with the help of fat cells, found on the territory of Russia. The age of the finds amounted to 558 million years. Upstairs The study was conducted by an international team of scientists from the Russian Academy of Sciences, the Australian national University and the University of Bremen, Germany. The results were published in the journal Science. The most ancient identified animal was dickinsonia — fossil animal of the ediacaran period (635-542 million years ago). It was opened in the mid-twentieth century, but until now it was not clear until the end whether she was really an animal, or treated fungi, lichens, or special, not the existing realm of nature. Australian researcher Ilya Bobrovskiy found on the territory of Russia near the White sea, the remains of dickinsonia containing molecules of cholesterol. This allowed

END_OF_DOCUMENT_TOKEN_TO_BE_REPLACED

Waterfall blew Gale force winds (video) Then a rainbow appeared. Upstairs Storm “Helen” made waterfall in the national Park the Yorkshire Dales in the North West of England in reverse. During the download an error has occurred. A unique phenomenon managed to capture on video. The force of the wind was reached 129 km per hour. Under its action the water began to flow upwards, near the waterfall a rainbow appeared. Except for “Helena”, a few days ago Northern England, Ireland and Scotland covered the powerful storm “Ali”. Two people were killed and several more were taken to hospitals with injuries. Following this storm on the UK cyclone is coming “Bron”. Rainy weather will last until September 24. See also: It looks like the famous Bloody waterfall in Antarctica Where is one of the most famous underground waterfalls in the world (photos)

END_OF_DOCUMENT_TOKEN_TO_BE_REPLACED

The American clocked on the bike to 295.6 km/h The result was a new world speed record. Upstairs Check American Denis Mueller-Koren’ok passed through the bottom of a dried-up salt lake Bonneville in Utah, USA. This route is regularly used to establish the maximum speed in road races because the smooth salt surface of the lake reduces friction. Bike 45-year-old mom of three children, a former champion of the USA at the mountain bike and track Cycling, dispersed with the help of dragster to 240 km/h and, after the cables were disconnected, Muller-Koren’ok dispersed independently another 5 km. During the download an error has occurred. Bike the record-holder of lightweight carbon materials have been equipped with special gears for stability at high speeds. The previous world record in 1995 established the Dutchman Fred Rompelberg: 268,7 km/h. the previous record for women was set in 2016 itself müller-Koren’ok: then she clocked

END_OF_DOCUMENT_TOKEN_TO_BE_REPLACED

In order SANA proved to be a record of the filming of “staging himataki in Idlib” The Syrian news Agency SANA published in advance of the video dramatizations himataki in Syria’s Idlib province. Upstairs Some time later, the video became unavailable on Youtube, of news it has also been removed. In a five-minute video presents several “versions” of the incident, moreover, it is noted that the one and the same people appear in different qualities. At the beginning of live on earth is a man — allegedly the victim himataki later it will be transferred to the stretcher in the ambulance, in other episodes this person already acts in a role of paramedic and pours water on the victims. The Agency claims that the trapped in his possession footage that proves the staged nature of the record. According to SANA, these fragments are duplicates of shots taken for the preparation

END_OF_DOCUMENT_TOKEN_TO_BE_REPLACED

Humiliating position of the head of the Polish in the photo with trump considered an insult to the nation The President of Poland Andrzej Duda made fun of in a humiliating pose for pictures together with his American counterpart Donald trump during the signing of the agreement on strategic cooperation. Upstairs The reason for the ridicule was the publication of this picture, the Manager on social networks, Ivan Shyla (Ivan Syla) to Facebook with the caption “on the left — the President of Poland”. He said this on his page in the social network. During the download an error has occurred. Polish TV channel Belsat fired the employee who posted the entry, without explanation. “No talking, just removed from a working chat and took away all access rights. Maybe someday I’ll write all about it in detail. Maybe not. But the situation — bottom”, — said the journalist. After that,