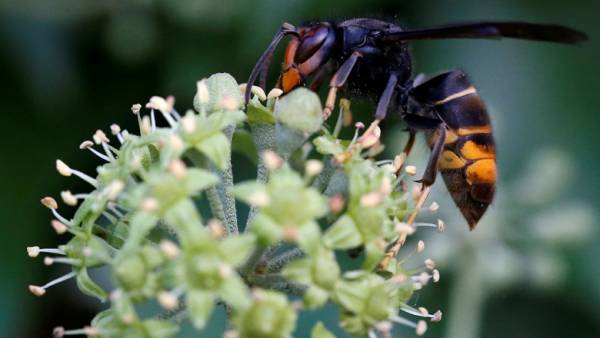 The species Vespa velutina is native to France. It is believed that in the country they appeared in 2004, when the insects were imported from China. By 2010, tropical hornets settled throughout the South-West of the country, and in subsequent years has reached the regions bordering Belgium, Germany, Italy and Switzerland.

It is noted that in the Northern region of Normandy France this week after the attack of insects killed 57-year-old man. Were with him woman with numerous bites was taken to the hospital. Also in the regional Department of English channel, said that for three months the insects attacked for 180 people, one of whom got stung 15 times.

The poison of the hornets, including tropical, it is not always fatal. Death occurs only if a person has an Allergy he suffered from multiple bites.

After the recent death of a man in the North, the French firefighters have warned citizens to not attempt to destroy a hornets nest and that the stings of insects is able to pass through most types of clothes.

In the case of a hornet attack rescuers recommended to hide in a confined space, for example, in the car or in the building in which insects cannot penetrate.

According to them, people are running at a slower speed than the flight of a hornet. In addition, running can only provoke the attackers, instead, firefighters are advised to stop moving, Crouch down and cover your head with your hands.