The expert said that meant the gesture Merkel in Salzburg

MOSCOW, 21 sen — news. German Chancellor Angela Merkel, ignoring the greeting of the Prime Minister of great Britain Theresa may on the sidelines of the informal EU summit in Salzburg, showed her displeasure with the situation with the negotiations on Brexit, said RIA Novosti Deputy Secretary of the Public chamber of Russia Sergey Ordzhonikidze. 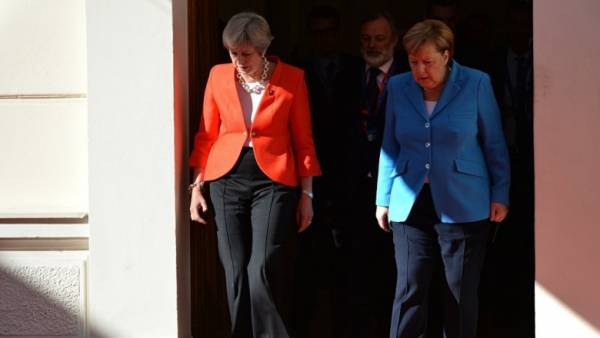 British media reported that German Chancellor Angela Merkel passed by the Prime Minister, Theresa may, when she smiled at the sidelines of the informal EU summit in Salzburg and leaned forward to say Hello.

“It is a signal expression of displeasure. What is your concern — all is understood. Negotiations on Brexit” — said Ordzhonikidze.

According to him, as an insult, this gesture should not be considered.

“It means I am unhappy. An insult would it be in that case, if Mei came up, and she turned back and walked away. Merkel all the details of the Protocol knows she has for many years been Chancellor and a much more experienced Mai. Surely this has been thought of. It wasn’t ever going to be impulsive gesture. She just wanted to show you that unhappy,” — said Ordzhonikidze.

Britain and the EU until the end of October should address three important questions that would allow Brexit in the interests of London and Brussels to finalize the agreement on withdrawal from the European Union, to solve the problem of the border with the Republic of Ireland and to develop the format of future relations.