Merkel responded to the greeting, may, write media

MOSCOW, 21 sen — news. German Chancellor Angela Merkel has not responded to the welcoming smile of the Prime Minister of great Britain Theresa may and passed by her during the informal EU summit, held in Salzburg, Austria, the British newspaper Daily Express. 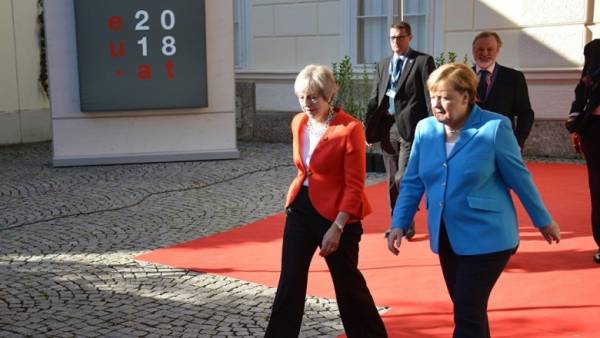 According to the publication, on the eve of the summit the British Prime Minister spoke with a group of EU leaders, when approached Merkel. Mei smiled and leaned forward, but the Chancellor ignored his British colleague and went to greet President of Lithuania Dalia Grybauskaite.

According to the results of the informal summit in Salzburg Angela Merkel said that the need to attain meaningful steps around Brexit until October.

“There is still a great piece of work on the subject, as will appear future trade relations, although we have expressed the General opinion that the issue of the internal market can’t afford to compromise,” said Merkel’s speech was broadcasted by the German TV channel N24.

Theresa may, in turn, noted that London has not yet received acceptable proposals for Brexit. The Prime Minister reminded that London will be ready to leave EU without a deal, unless there is a proposal that would suit the UK.

Leading researcher of the Center for German studies Institute of Europe Russian Academy of Sciences Alexander Kamkin sure why Merkel may publicly is not only the fact of a Brexit, but its format.

According to the expert, London and Brussels failed to reach agreement on the soft options. According to him, for Angela Merkel, the European Union as a single integration Association is a core value, and rolled back to the institution of sovereign States it regards as a challenge.

“And in this case it is considering may as a politician serving a bad example for other European countries that are quietly starting to think about how the EU in its current format meets the interests of their particular nation-States”, — the expert has told radio Sputnik.