VLADIVOSTOK, September 20 — RIA Novosti. The Secretary of the election Commission of Primorsky Krai Natalia Kamaeva told RIA Novosti that he supports the position of the CEC on the necessity of cancellation of results of elections of the head region. 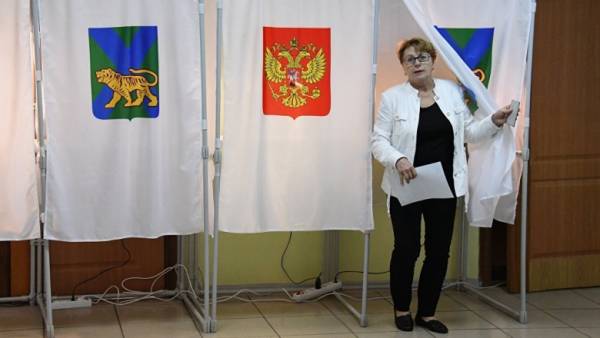 “I support the position of the CEC on the cancellation of election results. But vote for the other 14 members of the Commission, will be known following the meeting that will be held today at 14.00 (07.00 GMT), said Kamaeva RIA Novosti.

Candidate for Governor of Primorye from the Communist party Andrei Ishchenko and acting head of the region Andrey Tarasenko accused each other of falsification of the protocols in the second round. Tarasenko after the publication of the first results of voting avoided his opponent by almost 30%, but after counting 50% of the ballots with a margin of 7% was leading Ishchenko. After counting 99.03% of the protocols Tarasenko again ahead of an opponent by 0.5 percentage points and scored 49,02%. On the CEC website on Tuesday appeared information about processing 100% of ballots, according to which Tarasenko received from 49.55% of the vote, while Ishchenko is 48,06%.

After submission of candidates ‘ complaints about violations of the CEC was sent to Primorye representatives to assess the situation at a meeting on Wednesday recommended that the electoral Commission of Primorsky Krai to recognize the results of early elections of the Governor void. The help of the CEC on the conduct of the second round States that the analysis of complaints revealed a gross interference in the election campaign with use of administrative resources. The CEC head Ella Pamfilova said about the cases of bribery of voters, forced voting, ballot box stuffing. Press Secretary of the Russian President Dmitry Peskov said that the Kremlin appreciate and support the position of the CEC to hold new elections of the Governor of Primorye.