In Kiev said that the hackers want to disrupt the process of obtaining autocephaly of the Ukrainian Church. 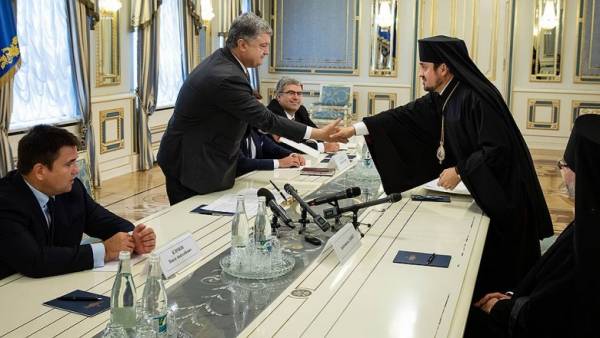 In Kiev said that the receipt of the Tomos of autocephaly of the Ukrainian Orthodox Church (UOC) is possible in October. In this regard, Russia was accused of attempted cyber attacks on the Patriarchate of Constantinople. This was discussed during the meeting of President of Ukraine Petro Poroshenko and foreign Minister Pavlo Klimkin from Ukraine appointed to Exarch of the Ecumenical Patriarch Bartholomew, Archbishop Daniel Pamphylian and Bishop Hilarion of Edmonton.

According to Petro Poroshenko, the process of granting autocephaly of the Ukrainian Orthodox Church came to the finish line. “We are together, especially in the last three years passed this way,” he said. In response, the Exarch declared that arrived to Ukraine to “continue the work already solved the issue of granting autocephaly of the Ukrainian Church”. “We direct and we will go to the finish line” — using the rhetoric of Petro Poroshenko, said Archbishop Daniel.

They also held a meeting with Minister of foreign Affairs of Ukraine Pavel Klimkin, who is in her results stated that the Ecumenical Patriarchate and of the exarchs recently launched cyber-attacks. This was Mr. Klimkin wrote in Facebook.