The Parliament speaker has called Hitler the greatest Democrat

Speaker of the Verkhovna Rada of Ukraine Andriy paruby called himself an opponent of direct democracy. He told about it on air of ICTV TV channel. 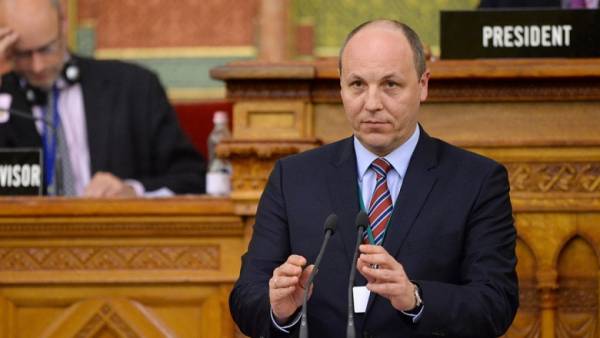 Speaking about the need to consider in Ukraine the Electoral code, the politician said that “the biggest supporter of direct democracy was Adolf Aleyzovich in the thirties”. Parubiy added that on the scientific level studied the methods of direct democracy, and came to the conclusion that this political system is one way of manipulation.

On 4 September the President of Ukraine Petro Poroshenko submitted to the Verkhovna Rada a bill, which sets nationalist greeting “Glory to Ukraine!” and “glory to the Heroes!” as a major in the army. These phrases, combined with the pulling up of the right hand, was adopted as the organizational password-greetings to the members of the Organization of Ukrainian nationalists and the Ukrainian insurgent army (both organizations are banned in Russia) in the period of the Second world war.

20 December 2017, the UN General Assembly adopted a resolution on combating glorification of Nazism, neo-Nazism and other types of discriminatory practices. The only countries who opposed the Russia-proposed document were the United States and Ukraine.