WASHINGTON, August 31. /TASS/ — In Washington also stressed that repeatedly warned about the serious deficiencies in the Agency’s assistance to Palestinian refugees. 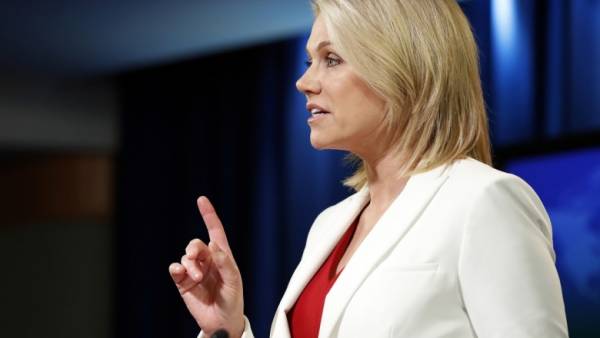 The administration of U.S. President Donald trump made the decision to stop funding middle Eastern UN Agency for assistance to Palestinian refugees and works (UNRWA). This is stated in a statement on Friday the statement of the head of the press service of the Department of state Heather Nauert.

“The administration has carefully considered the question and came to the conclusion that the United States will not make additional payments to the UNRWA. When in January we assisted in the amount of $60 million, we have made it clear that the US no longer intend to carry a highly disproportionate burden of the costs of UNRWA, which hung for many years”, — stated in the document.

“In addition to the budget deficit and inability to arrange for adequate and appropriate sharing of the financial burden, the model of work and budget practice used by UNRWA for many years — including taking into account endlessly and rapidly growing number of aid recipients are simply irrational and are in crisis for many years. The United States will no longer transfer new funds to this activity, which has irreparable flaws,” reads the statement. Instead, American authorities intend to consider new models and ways of interaction, including “direct assistance directly from the United States and other partners.”

Earlier, the US government at the direction of trump cancelled the allocation of Palestine aid worth $200 million, noting that this decision is influenced by the situation in the Gaza strip, where Palestinian movement “Hamas threatens the lives and worsening the humanitarian and economic situation”.

In early January, trump has proposed to stop providing financial aid to Palestine for not wanting to negotiate with Israel, on 16 January, the state Department announced that the United States will transfer to UNRWA’s $60 million, which is less than 20% of the annual United States contributions to the Agency’s budget. In the past year, Washington has allocated more than $350 million, which accounted for approximately half of the total budget of the Agency. The reduction of the U.S. funding has put the group in serious financial trouble. As noted by the Washington Post, the US decision to refuse financial assistance to UNRWA, according to experts, will worsen the already difficult humanitarian situation in the region and will lead to an increase in the level of violence, particularly in Gaza.