Moscow. May 28. INTERFAX.RU — the Central district court of Kemerovo satisfied the petition of a consequence about arrest of the head Department of EMERCOM in Kemerovo oblast Alexander Mamontov, accused of negligence and embezzlement in the case of the fire in the shopping centre, “Winter cherry”. About soobshaet the correspondent of “Interfax” from a court hall on Monday. 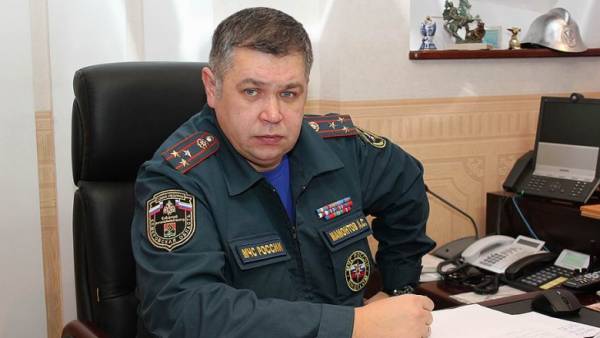 “The court decided the petition of the investigation to meet to elect a mammoth measure of restraint in form of custody up to July 25,” said the judge.

As reported, during the trial it became known that the Mammoths filed a letter of resignation.

According to investigators, the Mammoths did not plan and did not check, starting in 2017, observance of requirements of fire safety at operation of shopping centre “Winter cherry”.

Additionally, we revealed the involvement of the mammoth and other yet unidentified persons for embezzlement of funds of the regional emergency Department for the sum about 2 million roubles.

The fire in TRTS “Winter cherry” in Kemerovo took place on 25 March. The fire started on the top floor, where the halls and where in the day there were many children. Killed 60 people, including 41 children.

In April the criminal case, searches were conducted in the EMERCOM of Russia across the Kemerovo region, and in the house of its head, and the heads of structural units.

Only in the case of fire arrested eight accused persons: the technical Director of the SEC George Sobolev, the management Hope Studenok; the head of the company “System integrator”, involved in maintenance of fire alarm systems in the Mall, Igor Polozenko; his subordinate Alexander Nikitin; guard Sergey Antoshin, which, as expected, did not include a warning system on the fire; the head of the Kemerovo state construction Tanzilya Komkova, CEO-owner Julia Bogdanova and the head of the fire guard Sergei Genin.