Pluto may be a giant comet

According to the new hypothesis of the formation of Pluto, a dwarf planet could be formed as a result of the connection of a huge number of comets normal size. 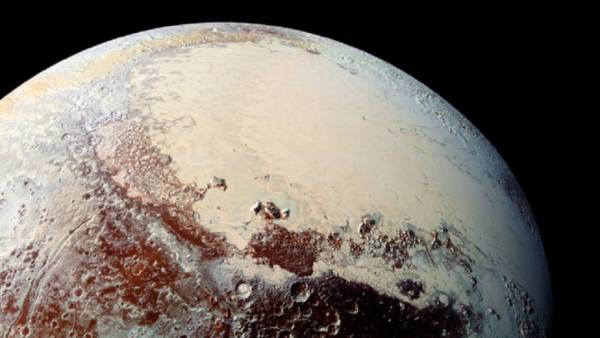 To such conclusion scientists have come, having analysed the composition of ice on its surface. The study is published in the journal Icarus. Preprint of the article is available on the website ArXiv.org.

A comparison of data obtained at different times from different satellites have allowed scientists to put forward a new hypothesis about the origin of Pluto. One of the vehicles, automatic interplanetary station “New Horizons”, in 2015, took a few pictures of Pluto that gave scientists the first idea of what is on the surface and the atmosphere. Another spacecraft, Rosetta, for the first time down to the surface of the comet and studied its composition. Scientists from the southwest research Institute (USA) compared these data and concluded that Pluto may be a gigantic number of comets.

The scientists call their hypothesis “model of the giant comet”. According to her, a billion comets were joined together in one cosmic body, so formed “giant comet”, Pluto.

It turned out that part of the glacier on the Plain of the Satellite in the field of Volume (which is often called “the heart of Pluto” because of the shape of the region that is similar to the standard image of the heart) a lot of frozen nitrogen. Rocks of the same chemical composition was discovered and on the comet 67P Churyumov-Gerasimenko, which investigated the “Rosetta”.

Astronomers have built a model to figure out what it might look like Pluto, if it consisted of a large number of comets similar to 67P.