Maniac, mystery and a masterpiece. How theft made Mona Lisa a huge hit

The picture that now even children know, the famous “Mona Lisa” (La Gioconda), Leonardo da Vinci, more than a hundred years ago was not so popular. The whole world she became famous due to the fact that was brazenly stolen in broad daylight. 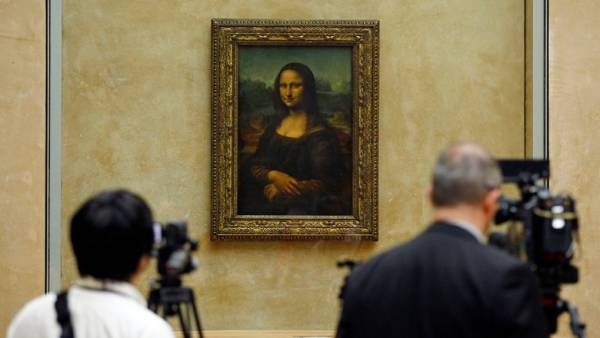 22 Aug 1911, French artist Louis Take went to the most famous Museum in Paris and went to the Salon of the Caret, where the last five years, was a painting of Leonardo da Vinci’s “Mona Lisa”, Louis just drew a copy of it. When you come to the right place, Monsieur, Take stared in wonder at a blank wall, where he stuck a four iron brackets. He rubbed his eyes, but nothing changed. The artist immediately turned to the guards there reacted very lazy.

What? Really? Ah, well, I guess, she’s going to photograph for publicity purposes. And now we have lunch, sorry.

In just a few hours Louis scandal reached the Director of the Louvre, and began the proceedings. It turned out — the picture is not of the photographers. “Where is she?”. “Oh My God! Is it stolen?”. Was a terrible bustle. The Louvre was immediately closed to visitors (not opened the whole week). Ministers looked everywhere — under the beds, under the stairs, in restrooms: no one believed that the “Mona Lisa” can easily this work can be taken out of the building, where hundreds of people working.

However, the picture is not found. The Paris police have officially declared the masterpiece of Leonardo da Vinci, written between 1503 and 1506, he was gone. The worst thing — there was not even any idea what could have happened to her. The thief left no clues.“Have stolen Russian and German”

Real panic began. The government dismissed the entire administration of the Louvre and closed the borders to prevent export of the “Mona Lisa” (as it turned out, it didn’t help). Arrested by the French poet Guillaume Appolinaire, in an interview, admitting: “I with pleasure would burn the Louvre.”

Was summoned for questioning to the station Pablo Picasso (then not-so-famous) as a friend Appolinaire and asked him questions with passion — could Picasso, as an artist, to steal the painting for initiating a personal inspiration? After all artists-all you can expect! The newspaper excelled in the versions, the theme of “Mona Lisa” never left the pages. Theft accused the security services of an old enemy — the Kaiser’s Germany, of course, gendarmes from Russia (because Russia has always been popular in some way to blame), and the international crime syndicate. For 2 years the face of “Mona Lisa” was decorated with a thousand front pages of Newspapers. Even the monstrous scale of the disaster of the Titanic in 1912 with a huge human victims are not pushed out of the press the theme of “theft of the century”.

The audience was sold out with a picture of a smiling mysteriously medieval girls, the dancers in “Moulin Rouge” were in masks on the faces of the Mona Lisa. It’s hard to believe, but before the theft is now the most popular painting was known only to a narrow circle of connoisseurs of art: the experts did not consider it the best work of Leonardo da Vinci. Now, about the Mona Lisa became world. However, the search was futile. The picture is gone.

“She gives me orders”

Masterpiece stolen from the Louvre by a former employee of the Museum — a 30-year-old Italian, a man named Vincenzo Perugia. Initially the police thought that the thief in advance and hid in the closet, waited the night and in the morning with no witnesses took the picture. But it was much more prosaic. Vincenzo knew the Louvre inside out, so at 7 a.m. on August 21, 1911, he quietly entered through the door for the staff — dressed in the white uniform of the Museum. On Mondays the Louvre was closed and deserted halls, and this made it easier Vincenzo task. He took the Mona Lisa off the wall, wrapped her in clothes and left the building. On the street he got a good look at the merchant shop, who wondered why a man runs from the Museum, holding a suspicious package. However, the testimony of a shopkeeper did not help police — and taken the fingerprints of the thief.

Most importantly — in the context of searches at past and present employees of the Louvre and the police came to a rented apartment in Perugia. He was very confident and explained — he worked all day in a completely different place, far away from the Museum. The police took his word and went, and Vincenzo, along with a stolen painting, moved to Italy. The future behavior of the thief reminds the style of the classic maniac kidnapper. For two years he kept the picture in the drawer under the bed and pulled out for intimate conversations, previously locked with a key. Communication grew closer, and eventually Perugia “gone crazy” — it seemed to him that Mona Lisa manages subordinates and giving orders.

The thief fell into complete disorder. He wanted to get rid of the “Mona Lisa”, to get rich and sail to South America. True friends art collectors he was not, and so Vincenzo took an absolutely brilliant solution. He came to Alfredo Geri, the owner of an art gallery in Florence, and offered to buy the painting. Geri contacted the Director of the Uffizi Museum, Giovanni Poggi, the shock confirmed to them a true masterpiece of Leonardo da Vinci. Both took the “Mona Lisa” — “for display of the customer” — and called the police who arrested the kidnapper in a hotel room. “Mona Lisa” was solemnly passed on exhibitions all over Italy, accompanied by delight and adoration of the public, and on 4 January 1914 with great fanfare was returned to France, where he took his place at the Louvre under constant armed guard.

The conspiracy of the adventurers

So why did Vincenzo Perugia stole the painting? Argue about it until now. The Italian won for “theft of the century” in just six months in prison and after release willingly distributed interview. He stated that he intended to back the creation of Leonardo home — as the “Mona Lisa” along with other Italian works of art were stolen by Napoleon. The Emperor of the French in the early nineteenth century really took away from occupied Italy to the Louvre a bunch of pictures, but “Mona Lisa” among them was Leonardo da Vinci himself had brought his masterpiece the gift of the French king Francis the First, when I was working in Paris as court painter. It happened 250 years before the birth of Napoleon, the Emperor has nothing exactly to do with it. However, the Italian journalists hotly touted Perugia as a patriot of Italy. “But he’s a crook!”, — they said with indignation by the French. “Yes, but he’s our crook, the most wonderful in the world!”, — enthusiastically said the Italians.

The second version of the “theft of the century” — allegedly ordered the kidnapping of the Argentine adventurer, the Marquis Eduardo de Valliere, together with the restorer Yves Chatroom in advance to produce six copies of the “Mona Lisa” and then planned to sell them to rich collectors around the world — as “the stolen painting”. However, Vincenzo Perugia had denied any encounter with Welfare, but who knows how it really was…

“JohnDoe” subsequently, a lot of everything, including the attack of mad men with the acid, and throwing her cups, and attempts to fill it with red paint, and “accommodation” in the secret vaults during the occupation of Paris in 1940-1944 the Nazis: a masterpiece of hid French patriots, as they were interested in personally Goring. But most of the painting was not stolen. Sam Vincenzo Perugia died 8 Oct 1925, aged 44 years on his birthday. He previously hoped that his funeral will gather all of Italy: but the death of the “thief of the century” Newspapers barely reported. Funny that the “Mona Lisa” would not be so famous in the world and recognized even by children, if not for the antics of a lonely, eccentric. Now such an event certainly would be called “viral advertising”…