The salaries of teachers to fit the answers

May decrees of the President 2012 on raising teachers ‘ salaries to the average wage in the region “still not done”, and teachers ‘ salaries from region to region differ by more than four times. This is stated in the joint report of the expert centre of the Confederation of labour of Russia and the Union “Teacher” (“Kommersant”). 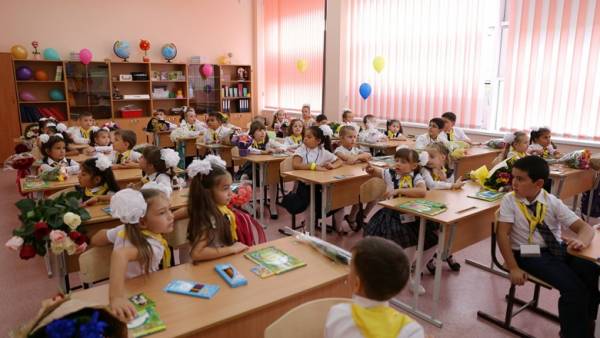 The document will be presented to the participants of today’s meeting of the presidential Council on human rights. In the Ministry of education “b” was assured that “took a number of measures that significantly improve the legal protection of employees of educational organizations”.

As it became known””, participants in the special meeting of the presidential Council on human rights under the theme “Implementing the right to education and protection of the rights of participants of educational process” may 21 will be a report on the status of payment of teachers.

The current system gives the ability to “manipulate the cost of education in accordance with the priorities of the regional authorities”, and by teachers does not allow to assert their rights, the authors of the report prepared by the trade Union “Teacher” and expert center of the Russian Association of trade unions the Confederation of labour of Russia.

Under the current system, the authors understand introduced in 2008, per capita funding of schools, which, from their point of view, “in practice turned out to be opaque”: “the Idea of the reform was that instead of the unified tariff scale, in which the teacher’s salary is primarily determined by his qualifications and experience, to use a new system consisting of a standard base rate for the conduct of lessons and stimulating part, dependent on the results of a teacher’s work”.

Experts point out several shortcomings of the new system, in particular, “the lack of clear criteria that would link the efforts of teachers and the results of its students.”

“For example, sat scores do not only depend on how well the teacher teaches, but the degree of participation in the educational process parents and Tutors, as well as just the individual characteristics of each child,” insist the authors of the study. They also claim that this approach “provokes teachers to work on “coaching” students on exam score, rather than a comprehensive training in the subject.”

The lack of uniform criteria for evaluating the effectiveness of the teacher “allows to manipulate the cost of education in accordance with the priorities of the regional authorities.” And this, in turn, leads to the fact that salaries of teachers vary in different regions is more than four times, the report said.

“When in 2012 he was accepted in the may decrees, the per capita standard was necessary to recalculate again, but nobody did, and decrees were executed by the optimization — downsizing of schools and increasing the load on teachers” — reminiscent of the authors.

According to them, 2014 was reduced to 20.8 thousand executives and 57,1 thousand other staff. “Optimization of personnel is mainly due to the better paid, senior staff and employees not related to teaching activities: librarians, psychologists, speech therapists, social pedagogues”, — explained in the document.

“Often when the teacher, if he has no experience and qualifications, not taking on classroom management, not head office, receives the calculated wages below the minimum wage, which is then brought to a minimal level,” the report said. The drafters cite the example of calculation of the salary of the teacher of physics of the highest category, the established model manuals of the Ministry of education. Base salary in this case is 4.5 thousand rubles. for Example, classroom management, and checking notebooks are estimated at 20% and 10% of basic salary. If the teacher performs all kinds of additional work, from classroom management to meetings with parents, wages excluding incentive payments is RUB 11,610

“The example shows that the real wage is highly dependent on the additional options the teacher will agree to take on. And direct the conduct of lessons, that is the main activity of a teacher is underestimated, i.e. it is below the minimum wage”, the authors say.

In a press-service of the Ministry of education assured “Kommersant” that in the execution of the may decrees of the educators “has been allocated the most significant additional funding”. “Values of indicators of wage level on average in Russia by the end of 2017 correspond to the values laid down in the decrees”, — consider in Department. The Ministry recalled that in 2013 Russia has been the transition to the so-called effective contract, which establishes the employment contract indicators incentives for achieving positive results. To the beginning of the year labour relations on the principles of effective contract issued with 96.4% of employees of educational organizations, a full transition is planned before the end of 2018. According to officials, the changes adopted “significantly increase legal protection of employees.” In addition to the wage increase the Department believes is important to its equitable distribution. According to officials, in December 2017, they developed and sent to regions guidelines “to distribute funds using the payroll so that salaries and wages accounted for at least 70% of the wage Fund of the organisation, thereby ensuring for the worker understood the guaranteed portion of monthly salary”, — explained “Kommersant” in the press service of the Ministry of education.

Co-chair of the trade Union “Teacher” Vsevolod lukhovitsk in conversation with “Kommersant” noted that “such legal term as “effective contract”, no.” According to him, with employees is a “regular employment contract”, which still protects the rights of teachers: “we have received a lot of requests from different regions, and I have never heard that the transition to an effective contract has led to an increase in salaries. In fact, it is a fixation of the funds allocated to the school: where she will take more?” Mr. lukhovitskiy noted that the report contains requirements for the Ministry of education to modify the current remuneration system, in particular, to make it more transparent and open, as well as to legislate that the “base rate used in determining the teacher’s salaries may not be below twice the minimum wage in the region.” “We are not talking about too much money, and the thrust of our report is to safeguard the rights of teachers across the country, regardless of the specific conditions in their region,” says Mr. Lukhovitsy. The likelihood that the report’s suggestions will actually be heard, mister lukhovitskiy assessed as “minor”.