Teenager in a wheelchair with cast legs are not allowed in the plane in Kurgan Moscow. May 16. INTERFAX.RU — Undergoing surgery, the teenager with a disability with the plastered foot could not get on the plane at the Mound, he was not allowed to Board the airline UTair, has reported “Interfax” the head of Seaside public organization of disabled people “Kovcheg” Artem Moiseenko. Employees of UTair were not allowed in the plane a handicapped boy, who had surgery on his feet. The airline felt that because of my cast it will take up too much space https://t.co/1BWNu2XF0E pic.twitter.com/FGyYjAehay — NTV (@ntvru) may 16, 2018 “Father and son, operated in the clinic of the Ilizarov, are unable to get into the plane. In the Mound of a child with a disability after surgery on the feet is not allowed on Board, stating the fact that it will take up too

END_OF_DOCUMENT_TOKEN_TO_BE_REPLACED 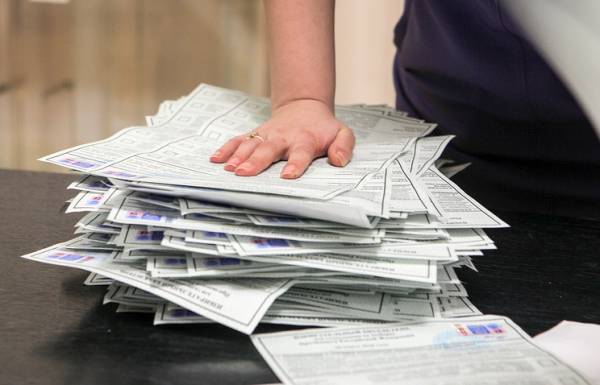 © Denis Abramov/TASS MOSCOW, may 16. /TASS/. About 60 lawsuits, including with the requirement of cancellation of results of elections filed to courts after the elections of the President of Russia on March 18. This was announced on Wednesday, CEC Chairman, Ella Pamfilova.

END_OF_DOCUMENT_TOKEN_TO_BE_REPLACED 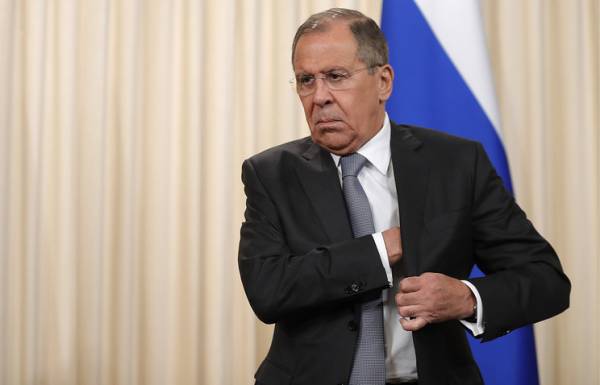 © Mikhail Japaridze/TASS MOSCOW, may 16. /TASS/. Allegations that the dead in Gaza, including children, are terrorists, blasphemous. It on a press-conferences on Wednesday has declared to the acting Minister of foreign Affairs of Russia Sergey Lavrov, commenting on the statements of American representatives.

END_OF_DOCUMENT_TOKEN_TO_BE_REPLACED 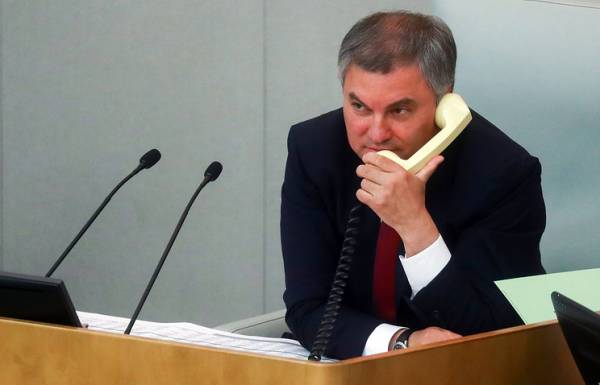 Chairman Of The State Duma Vyacheslav Volodin © Sergey Fadeichev/TASS MOSCOW, may 16. /TASS/. Chairman of the state Duma Vyacheslav Volodin Thursday may raise the question about revision of the draft law providing for criminal responsibility for the execution of anti-Russian sanctions. TASS said Wednesday the head of the Russian Union of Industrialists and entrepreneurs (RSPP) Alexander Shokhin following the results of discussion of the matter with the speaker of the lower house of Parliament.

END_OF_DOCUMENT_TOKEN_TO_BE_REPLACED 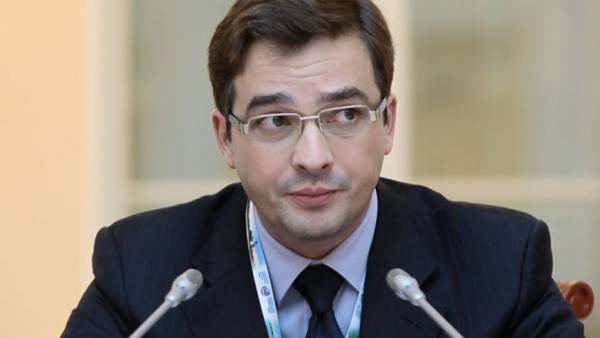 A former banker Yury Kotler found dead in Moscow apartment Moscow. May 16. INTERFAX.RU — Former Vice-President of VTB Bank Yury Kotler was found dead in an apartment in the center of Moscow, reported “Interfax” informed source. “Kotler found in the apartment on Bolshaya Nikitskaya street. Died from a gunshot wound. Found near a suicide note,” — said the Agency interlocutor. According to the text of the note, the incident related to personal motives Kotler, the source added. In turn, the representative of a capital Central Board of the Investigative Committee of Russia Yulia Ivanova told the news Agency that based on this fact initiated preliminary examination. “May 16, 2018 in an apartment house, located on the Bolshaya Nikitskaya street in Moscow, found the body of a man with a gunshot wound. On this fact the investigating authorities of the Main investigation Department of the Investigative Committee of the Russian

END_OF_DOCUMENT_TOKEN_TO_BE_REPLACED 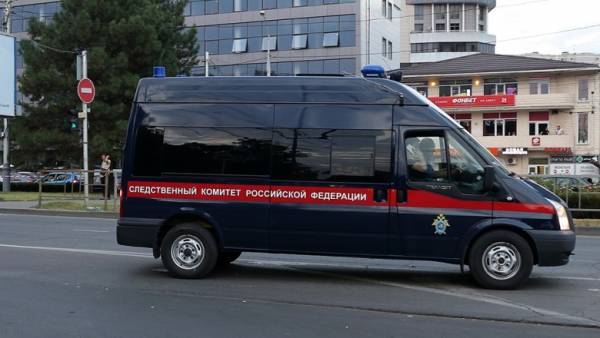 TFR filed a case over the detention of the editor-in-chief “RIA Novosti Ukraine” The investigative Committee of Russia (TFR) opened a criminal case on detention in Kiev, the chief editor of the Agency “RIA Novosti Ukraine” Kirill Vyshinsky, suspected of treason and Subversion against Ukraine. As stated by the CCJ, Mr. Wyszynski was illegally prosecuted. The Agency considers that the Ukrainian authorities hinder the professional activities of a journalist “by being forced to abandon the dissemination of objective information about events in Russia and Ukraine related to the legitimacy of joining the Russian Federation the Autonomous Republic of Crimea, its further economic and social development, as well as the negative effects of the armed conflict in the South-East of Ukraine.” The case was initiated under article 144 of the criminal code (obstructing the lawful activities of a journalist) of article 299 of the criminal code (attraction obviously innocent person to

END_OF_DOCUMENT_TOKEN_TO_BE_REPLACED 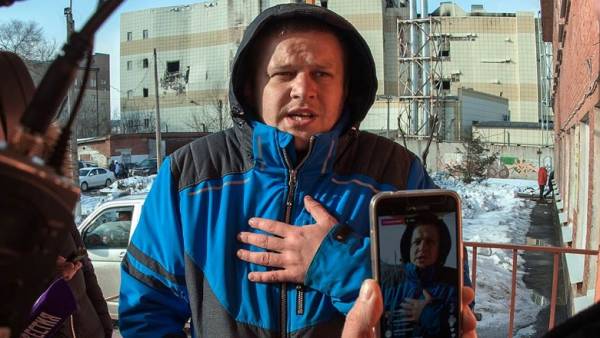 Igor Vostrikov went into politics He participated in the primaries of “United Russia” on elections in regional Duma. Kemerovchanin Igor Vostrikov, who at the fire in the shopping centre, “Winter cherry” killed three children, wife and sister, filed an application to participate in the primaries of “United Russia” on elections in regional Duma. In the party of participation of mister Vostrikova not comment. In the Kuzbass ended accepting applications for participation in the primary election for the nomination of the party “United Russia” in a regional Council, a list of participants published on the website of the preliminary vote. The party’s candidate Igor Vostrikov did not comment. The candidate filing is also not explained. “Something like that. No comment” — he said “Kommersant”. Igor Vostrikov 31 years, he is a non-partisan, registered as an individual entrepreneur. Has secondary education, he studied at Kemerovo state technical University, he was awarded the

END_OF_DOCUMENT_TOKEN_TO_BE_REPLACED 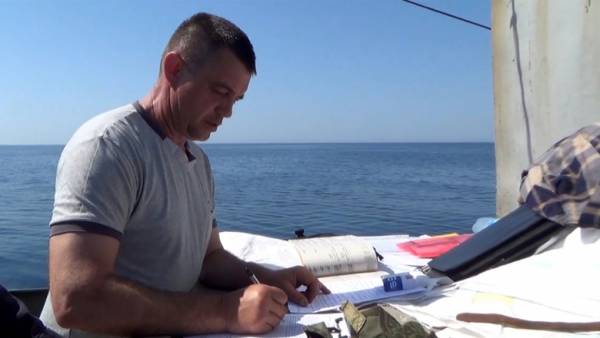 FSB opened a case of poaching at the captain of the Ukrainian vessel The investigative Department of the FSB of Russia opened a criminal case against the captain of the Ukrainian vessel “NMR-0041” B. Nowicki for illegal extraction of fish. On 16 may, reported the press service of the FSB. The ship was seized. According to intelligence agencies, most of the fish managed to save and release into the sea. Part of the catch was lost. On may 4, Russian border guards detained near the Western coast of the Crimea, the Ukrainian ship “NMR-0041”, which was suspected of illegal fishing. His crew laid a snare for flounder-Kalkan at Cape Tarkhankut. May 7 Ukraine has opened a criminal case over the detention by Russian border guards of the vessel. . How notes portal Корреспондент.net libinspector of Ukraine has repeatedly delayed the ship “NMR-0041” for illegal fishing of sturgeon.

END_OF_DOCUMENT_TOKEN_TO_BE_REPLACED 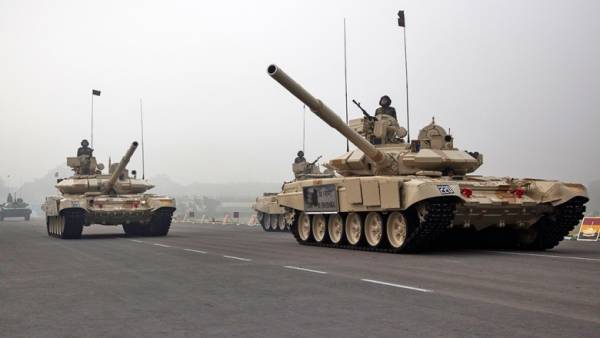 In India, explained the rejection of Russian weapons in favor of American India in the supply of arms cooperates with the United States because of the difficulties that occur in the military-technical cooperation with Russia, reported The Times of India sources in the Indian government. “India has consciously diversified its arms imports because of the tendency of Russia to adhere to delivery schedules, the propensity to increase spending in the middle of the process of execution of the contract, obstacles to technology transfer and to unreliable supplies of spare parts”, — writes the edition. It is also noted that India still needs the cooperation with Russia, especially in modern strategic projects, in particular nuclear submarines. Delhi also need Moscow’s help in maintenance of already existing models of Soviet and Russian weapons. The publication notes that India has probably abandoned the program FGFA (Fifth Generation Fighter Aircraft), involving the creation on

END_OF_DOCUMENT_TOKEN_TO_BE_REPLACED

The American died, refusing cancer treatment for the birth of healthy children MOSCOW, may 16 — RIA Novosti. A resident of the USA, who refused cancer treatment for the birth of healthy twins, has died, according to the website GoFundMe, where he launched a campaign to raise funds for the care of the patient. It is noted that the 32-year-old Daniel dick died 26 April — ten months after the birth of twins. In the fall of 2011 the woman removed a melanoma (skin cancer. — Approx. ed.), after which for five years Daniel was observed by a dermatologist, and recurrence was not. In 2015, she gave birth to their first child. During the second pregnancy in Daniel appeared strange symptoms: she was very tired and had trouble talking. On the fifth month, the woman could not pronounce and a separate phrase, after which she was taken to the hospital