Matviyenko urged the government to change its work style

MOSCOW, may 15 — RIA Novosti. The style of work of the Russian government is too bureaucratic — matching is time-consuming, this needs to change, since the implementation of the may decree of the President required a forced mode of operation, believes the speaker of the Federation Council Valentina Matvienko. 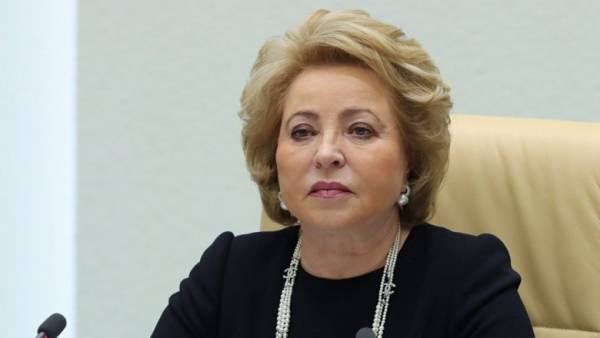 Earlier, the press Secretary of the head of the government Natalia Timakova reported that Prime Minister Dmitry Medvedev on Tuesday will present President Vladimir Putin proposals on the structure of the government.

More important (than the government) more. In many respects it is necessary to change the style of work. I mean, many things we have excessively bureaucratized. We must try to avoid it. It is necessary to change the system of coordination in the government, especially with regard to digital technologies. Now the decision-making system very long.Valentine Matvienkova Of The Federation Council

According to Matvienko, this does not mean that the quality of the work should be sacrificed to speed.

“But you need to radically change is to increase the efficiency in decision-making and responsibility of everyone who prepares and accepts them,” added the speaker.

Matvienko emphasized that in the may decree of the President of Russia set a number of ambitious targets, including to enter into the five of the most economically developed States.

On the day of the accession of Putin to the powers of the President of Russia for a new term, he published his decree “On the national goals and strategic objectives development of the Russian Federation for the period up to 2024”. In it, the President instructed to ensure the entry of the Russian Federation among the five largest economies in the world, economic growth above the world, inflation does not exceed 4%, to increase the export of medical services of not less than four times, compared to 2017, to secure a mortgage at 8% for middle-income families, increase the construction of housing and 120 million square meters a year to improve life expectancy to 78 years.