The state Duma responded to the “unfriendly actions” of the US

The project of counter-sanctions and amendments to the criminal code adopted in the first reading. 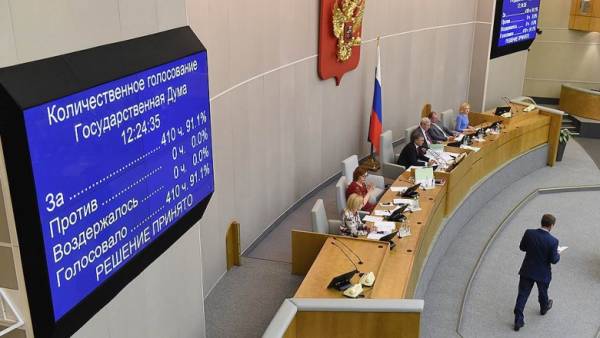 The state Duma unanimously adopted in the first reading the draft law on countering the us sanctions and amendments to the Criminal code (CC), which is responsible for the execution of sanctions of foreign States on the territory of the Russian Federation. For the second reading, which will be held on may 17, the draft law “on measures against hostile actions of the United States” will remove the list of specific fields and industries that can apply counter-sanctions. The Communists are asked to register in the law a clause stating that the drugs the President and the government in the list of sanctions made. Acting Plenipotentiary of the government in the state Duma Alexander Sinenko assured that the sanctions lists will be discussed with members and experts.

The bill of measures on sanctions the United States was unanimously supported by all deputies of the 412 present in the meeting. In the first reading adopted in the form in which it was made: it lists the specific areas in which the government and the President may prohibit imports from countries that have adopted sanctions against Russia, including medical equipment and medicines. In the course of public discussions in the Council of the Duma deputies decided to exclude from the bill the specifics to decide what will be expressed in counter-sanctions, will the President and the government. As reported by “Kommersant” on the eve, a new version of the draft prepared with the participation of the lawyers of the state legal Department of the presidential administration, is ready and will be examined on may 17.

Despite the fact that the drugs promised the text of the bill be removed, this does not mean that such sanctions cannot be imposed, drew attention in the Communist party faction.

Deputy Oleg Smolin has suggested a second reading to develop the amendment, which will be obliged to agree on sanctions lists with the relevant committees of the state Duma. First Deputy head of the faction “United Russia” Andrei Isayev said that the principle of separation of powers does not allow for such coordination, but the concept of the initiative supported. “It should be discussed, including with the state Duma, the Federation Council. I think that in the framework of our agreements with the government we implement it”, — he assured. Acting Plenipotentiary of the government in the lower house Alexander Sinenko assured that the government undertakes to discuss contraction with the deputies and experts.

Amendments to the criminal code, which include fines of up to 600 thousand rubles and imprisonment for up to four years for “acts or omissions” to implement anti-Russian sanctions, was also adopted unanimously. The bills are intended to serve as a response to the extension of US sanctions in stop-lists were made 24 Russian officials and oligarchs and 14 associated entities.

“We have Aeroflot and Sberbank, which in the Crimea is nothing open and you can use the bill for depriving the competition of residues passengers and investors”, — expressed his concerns MP from the Communist Nikolai Kolomeitsev. “We are talking about the normal transactions and operations, that is automatically the company operates, it needs to implement something, but it does not, citing the sanctions. As for the decision of questions about opening something, making hard deals, it certainly should be governed not by criminal law, and political will,” said Andrei Isayev. He explained that the law may relate, for example, a Bank employee who refuses to open an account citizen under sanctions.

The second paragraph of the bill provides for punishment for Commission of a Russian Federation citizen of a deliberate action, contributing to the imposition of sanctions by a foreign state. “We are talking about people who can’t win elections, can’t get even a decent percentage of votes and rely solely on foreign intervention, they are actually fighting against their own country, — said Andrey Isaev.— Now there is no such legal wording, but it remained as a moral formulation — called “treason””.