MOSCOW, may 11 — RIA Novosti. Prime Minister Dmitry Medvedev have not yet submitted to Russian President Vladimir Putin proposals on the structure of the government, reported the press Secretary of the head of state, Dmitry Peskov. 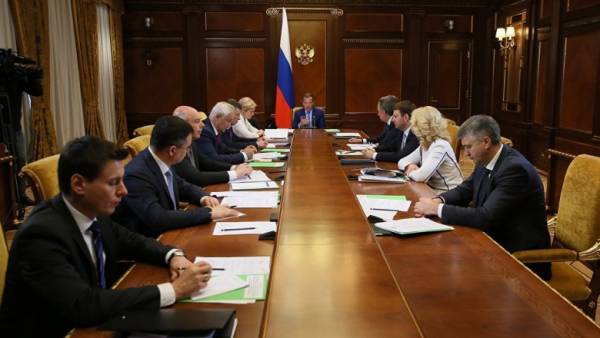 “While this has not been done,” said Sands, answering the journalists ‘ questions.

The Russian Cabinet of Ministers resigned after the accession of Vladimir Putin as President for a fourth term on may 7. The next day the state Duma approved the candidacy of Dmitry Medvedev proposed Putin as Prime Minister. In accordance with the Constitution, now the Prime Minister shall not later than one week after appointment, submit to the President proposals on the structure of the Federal bodies of Executive power. The day before, answering questions of journalists, Peskov said that to expect this as this and next week.

In the course of consultations in the state Duma in front of his statement, Medvedev has announced plans for its deputies: first Deputy Prime Minister should be the Minister of Finance Anton Siluanov (will oversee the financial-economic bloc), and Deputy Prime Minister Tatiana Golikova (ciblock), Alexey Gordeev (AIC), Dmitry Kozak (industry and energy), Vitaly Mutko (construction), Yuri Borisov (DIC), Olga Golodets (culture and sport), Maxim Akimov (digital economy, transport and communications) and Konstantin Chuychenko (chief of government). Later it became known that the post of Deputy Prime Minister will retain and Yuri Trutnev.