Trump: the US does not conduct with the DPRK negotiations on the withdrawal of American troops from the Republic of Korea

WASHINGTON, may 4. /TASS/. The United States does not lead the DPRK talks on possible withdrawal of American troops from the Republic of Korea. This was stated by the President of the United States Donald trump, responding on Friday to questions from journalists at a military base Andrews near Washington in Maryland, before leaving on a working trip to Dallas (Texas). 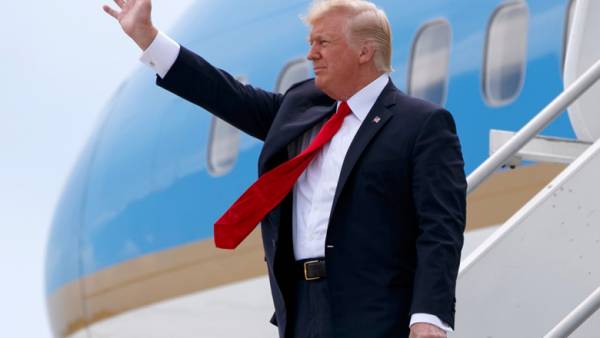 He was asked to clarify, discussed the option of withdrawal of U.S. troops from South Korea in connection with the preparation of the first summit in the history of the US and the DPRK, which could take place in the near future. “Actually, no. Not now. Definitely not” — said the head of the US administration.

“And we didn’t ask for this,” said trump, apparently, keeping in mind that Pyongyang has not appealed to Washington to discuss the possible withdrawal of U.S. troops from the territory of the Republic of Korea.

However, the us President also signaled that in the future the United States may be willing to consider the idea of downsizing or even complete collapse of its military presence in the Republic of Korea. According to trump, he would like in the future to reduce costs associated with the maintenance of American troops in South Korea.

“But, I must tell you, at some point in the future I would like to save money. There we have 32 thousand servicemen,” he said on the matter.

“I think there will be a lot of wonderful things,” trump said further, speaking of the signs of a possible “thaw” in us-North Korean relations. “However the troops are not negotiable. Absolutely,” — said the President of the United States.

As reported previously, the newspaper The New York Times, trump gave the Pentagon the order to prepare the options for the drawdown of U.S. troops in South Korea. But the White house soon issued a denial of this information. “The material of the New York Times was complete bullshit. The President has not asked the Pentagon to provide options to reduce the American forces stationed in South Korea,” said in a written statement, trump’s assistant for national security John Bolton.