The police used tear gas to disperse protesters in Paris 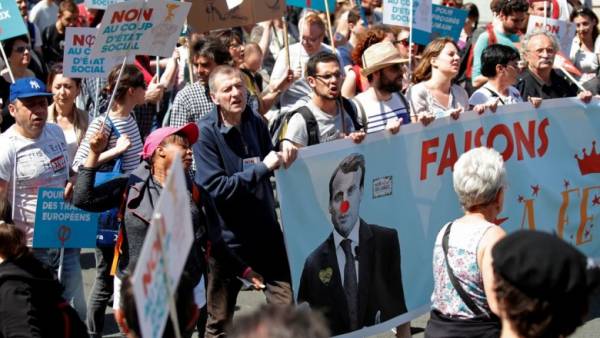 After Hiking a column of peaceful demonstrations against President Emmanuel Macron, timed to the first anniversary of his coming to power, has reached the end point of the route — Bastille — radical youth began to lash out at journalists.

The police arrested one of the thugs, after which the protesters began to demand that the young man was released. While he was escorted to a police car, a group of hooligans went along with police officers, throwing them bottles and stones. To pacify them, the police were forced to use tear gas.

The arrests started. But radicals do not calm down and even jostle the police. #Paris #Macron pic.twitter.com/zWDSJMFQqa

Currently, the confrontation between law enforcement and youth continues, but none of the parties has not taken more active steps. The site of the collision drove a water cannon. The police lined up and blocked the street, many of them wearing gas masks, they are armed with batons and shields.