Time to stand on ceremony. Both in Russia and in the world celebrate the inauguration of presidents

May 7 in the Kremlin there will pass inauguration of the President of the Russian Federation Vladimir Putin will officially take office at the next 6-year period. 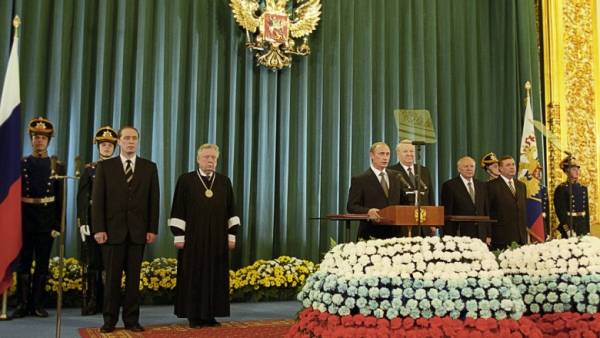 This will be the seventh ceremony in the country’s history. AiF remembers what traditions accompany this action in Russia and in the world.

Interestingly, a special law regulating this ceremony, we are there.

In the 82nd article of the Constitution sets only the text of the oath that says the President, 33 words, including prepositions and conjunctions. However, in 27 years time to develop unwritten tradition. Since 2000, the inauguration ceremony held at the St. Andrew hall of the Grand Kremlin Palace.

First in the hall are the soldiers of the Presidential regiment dressed in the form of the XIX century, They are symbols of presidential power — the standard and sign of the President (a unique copy of the order “For merits before Fatherland” I degree). At 12 noon with the chimes in the hall is elected President. He walks to the podium, where he was waiting for the President of the constitutional court (he takes the oath) and the speakers of both houses of Parliament.

The President says the words of the oath, and the President of the COP gives him the symbols of power. From that moment, the head of state officially took office.

The ceremony usually concludes with a brief speech by the President and fireworks on the Kremlin embankment.

In previous years after the inauguration of the President took the parade of the Presidential regiment, and then attended a solemn service in the Kremlin’s Annunciation Cathedral. Then in the Kremlin Palace was held a solemn Banquet for guests. In different years was from a half to two and a half thousand. Probably, the current ceremony with the exception, in this sense, will not.

Where to go, what to bring

The first inauguration was held in the boardroom of the Congress of people’s deputies of the RSFSR of July 10, 1991 the Oath of Yeltsin brought to the Constitution of the RSFSR and of the Declaration on state sovereignty of Russia. Then he blessed the Patriarch, and the choir sang “glory” from Glinka’s Opera “a life for the Tsar”. In 1996, wanted to hold the ceremony at the Cathedral square under the bells, but then refused it. The Kremlin said that this format will cost more, but the true reason probably was the poor state of health of Yeltsin shortly before the inauguration, he suffered a heart attack.

Led the country in 2000, Vladimir Putin has set the tradition of the solemn passage of the elected leader through the enfilade of the ceremonial halls of the Grand Kremlin Palace. A special parade uniform of the Presidential regiment, referring to the era of the war of 1812, first appeared at the next ceremony in 2004

An innovation this year will be the invitation to the inauguration of the youth.

Approximately 250 volunteers from the election headquarters of Vladimir Putin will attend the celebrations in the Kremlin. It was also expected that in the Kremlin the President was the first to come not to “Mercedes Pullman”, and in the domestic limousine, created in the framework of the project “Cortege”. But the press Secretary of the President Dmitry Peskov said that the final decision on this issue pending.

World opitara in the history of the presidential inauguration was held in the United States April 30, 1789

The idea was decommissioned from the Royal coronations of Europe. It’s funny that initially the American President had the title as king “Your Majesty”, but at the last moment refused it.

Elected the first head of state George Washington took the oath on the Bible — those words still repeated all the presidents of the United States. Following this, the orchestra began to sing a solemn hymn. However, the musicians habitually played the song you know best — anthem of UK “God save the king”. Given that the US only recently finished the war with the British, the situation was awkward.