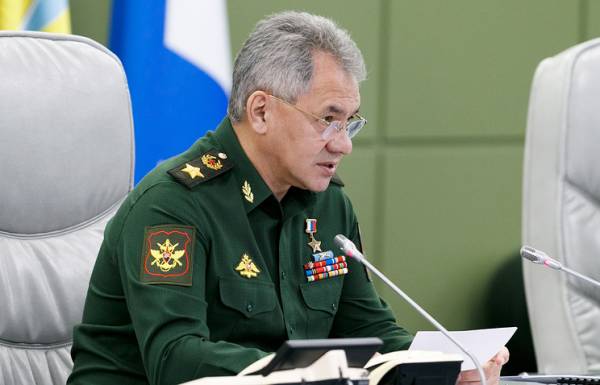 MOSCOW, may 3. /TASS/. The state defense order for the year 2018 will amount to 1.5 trillion roubles, almost 70% of the funds will go towards the purchase of modern weapons, said Russian defense Minister Sergei Shoigu.

“The state defense order for the current year includes more than 3 thousand 700 jobs to the amount of 1.5 trillion rubles. Almost 70% of these funds will be used for the procurement of modern weapons and military equipment,” – said Shoigu at the selector meeting of the military Department on Thursday.

He noted that at the moment has already signed contracts for almost 85% of the total allocated funds.

According to him, the Ministry adopted measures will help significantly reduce the risk of untimely fulfillment of state defense order: the terms of tender procedures and signing of contracts with the only performers, as well as prolongation long-term liabilities.

Shoigu said that during the conference call will be considered the placement of the state defense order for the year 2018 and the planning period of 2019-2020, in addition, Deputy defense Minister Yuri Borisov will report on the measures taken to increase the rate of placement of state orders. This part of the meeting is closed to the media mode.

The Navy of Russia until the end of 2018, will include six new and four refurbished vehicles, said Shoigu.