The Patriarch of Moscow and all Russia Kirill has accused the President of Ukraine Petro Poroshenko in an “unprecedented interference” in the religious life of the country. 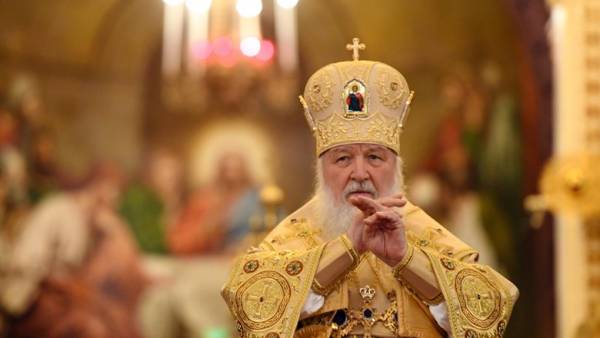 He stated that the name change of the Ukrainian Orthodox Church (UOC) of the Moscow Patriarchate, which insists the Ukrainian authorities, will entail large-scale action to seize churches of the UOC. “Everything that can occur around the temples, has the risk to turn into bloody conflicts,” he said in Moscow, summing up the year at the meeting of the Supreme Church Council (quoted by “Interfax”).

Patriarch Kirill reminded that the separation of the Church and of religion from the state is one of the fundamental European values:

So, in violation of this fundamental European values of the state in the person of the President directly interferes in Church governance, we can say, heads something called the unification Church Council, involved in the negotiations with Constantinople regarding the so-called Tomos.

According to Patriarch Kirill, the political goal of creating a United Ukrainian Church formulated by the Plenipotentiary representatives of the States, which operate in Ukraine, and representatives of Ukrainian authorities: “we Need to break the last link that unites our (Russia and the Ukraine.— “B”) people, and that tie is a spiritual connection”. “We are witnessing a civilizational disaster,” he said.

the creation of the “Ukrainian Autocephalous Church”

Patriarch Kirill have repeatedly criticized the Ukrainian authorities and supporters of an independent Ukrainian Church. So, on December 6, he said that the announcement by Petro Poroshenko convene the unification of the Cathedral shows the price of his statements about the European choice and talking about government intervention in Church Affairs. On 9 December he said that he considers unacceptable the granting of independence to the Orthodox Church in Ukraine. He called the supporters of the autocephaly of evil, ready to force to achieve their goal and “to destroy other people’s lives”.

December 14, Patriarch Kirill sent a letter to the heads of the local Orthodox churches, the Pope, the head of the Anglican community, the Archbishop of Canterbury, the General Secretary of the world Council of churches, the UN, the OSCE, and the President of France and Chancellor of Germany. He urged them to “defend the bishops, clergy and faithful of the UOC of discrimination and pressure from the Ukrainian authorities to uphold international law freedom of conscience and religion”. December 19, the Patriarch said that the creation of a United Orthodox Church in Ukraine will lead to “spiritual death” of the country.