Died in USA eight-year-old boy from Guatemala, who was at the centre for illegal migrants, said immigration. 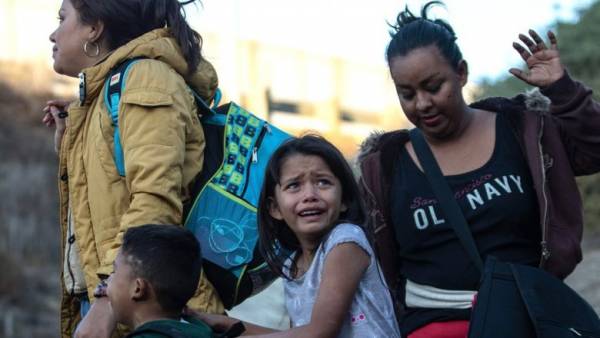 This is the second such incident in a month. In mid-December in the hospital of the city of El Paso died year-old girl from Guatemala.

What happened to the boy?

The boy died during the night of 25 December, said customs and border protection of the United States.

After detention in Texas city El Paso of the child and his father were taken to a local centre for illegal migrants where they stayed for two days. Then they were sent to the border checkpoint in El Paso, where they remained for the next two days.

On 22 December they were transferred to the border of the city of Alamogordo, new Mexico.

On Monday morning, a border police officer noticed that the boy was coughing, and his eyes appeared unhealthy Shine.

In a statement the Agency says the symptoms of probable disease, the boy was found on Monday. The boy’s father was taken to a city hospital, where the doctors decided that the child has a common cold and prescribed him paracetamol.

When he was already preparing to be discharged, the boy was diagnosed with a high fever (39,4°C) and left it for further investigation. But after some time it was prescribed, prescribing for antibiotics and ibuprofen.

The boy and his father were sent to the place of detention, where the child received the prescribed medication. Two hours later he began vomiting.

AP: trump allowed the military to open fire on the border with Mexico

In a statement, the border guards said that his father refused hospitalization, because the child got better.

About 10 o’clock in the evening, the child became lethargic, and he was again sent to the hospital. In the way he vomited, after which the boy lost consciousness. Doctors at the hospital failed to resuscitate him.

The service notes that the cause of death is not yet established. The father of the baby is still in the United States.

The head of customs and border protection service Kevin Macalino called the child’s death tragic and said that his office will conduct a medical examination of all children detained while trying to cross the border. Special attention will be given to children under 10 years of age.

He also noted that customs and border protection, in cooperation with the immigration and customs police to improve the conditions of detention of migrants.

Almost half of the migrants returned home during the last quarter of mecapaca on the border.

In November, the American guards used tear gas on crowds of migrants, among whom were children. People tried to cross the U.S. border.

The border guards said that they were attacked. But the guards have criticized the use of excessive force, while Mexico demanded an investigation of the incident.

Thousands of migrants walked for many kilometers, going on a long journey from Central America to the US border.

Migrants from Guatemala, Honduras and El Salvador say they are fleeing persecution, poverty and violence. They moved in large groups, overcoming walk of more than 4 thousand km. Among the migrants are families with children.

Many of them wish to remain permanently in the U.S., but American authorities have warned that all who enter the country illegally will be arrested and then appear before the court and then, in case of refusal to grant a residence permit will be deported.

Donald trump has promised not to let any one person, yet the courts do not decide on each specific case, and it can be a very long process.

People are forced to live in temporary centres in Mexican border cities Tijuana and Mexicali.