The President reviewed the year-end

Big press conference of Vladimir Putin was more popular than his other appearances on TV this year. 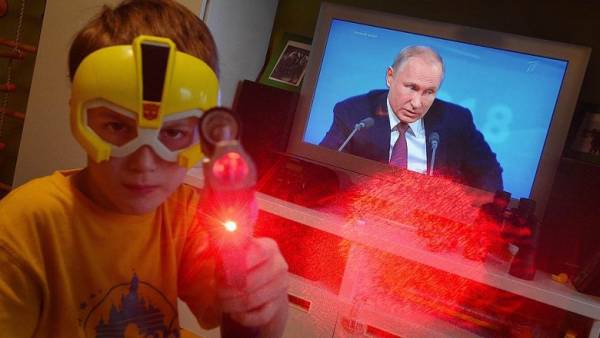 Press conference of President Vladimir Putin on 20 December, which was broadcast on six TV channels, saw 11.3% of Muscovites — an average of 1.4 million people. This is evidenced by the preliminary data of Mediascope. Interest in broadcasting is on the decline after the annexation of Crimea in 2014. However, among the TV formats is being with the participation of heads of state remarks at a press conference in 2018 was the most popular.

Fourteenth annual press conference of Vladimir Putin gathered at the screens of 11.3% of Muscovites over 18 years, according to the preliminary data of Mediascope. Among the inhabitants of the capital, who in those hours watching television, nearly two-thirds of viewers (64%) and in absolute terms, about 1.4 million people. The journalists communicate with the President this year lasted 3 hours and 45 minutes, the event was broadcast “First channel” “Russia 1” “Russia 24” and “Moscow 24”, NTV and channel “360”. Last year the broadcast was about the same rates: as wrote “Kommersant”, it was watched by 11.6 percent, or 1.44 million adult Muscovites (the share of the audience made up 60.7 per cent).

The rating of the broadcast messages to the Federal Assembly on March 1, which was a record duration was 8.4% in average of 1.04 million residents. Five channels with the message watched for 44.1% of the Moscow audience. A “Direct line with Vladimir Putin” 7 Jun looked 8.3% of the capital, or 54.6% of those who at this time was a TV. In absolute terms, her audience was of 1.18 million residents.

Political analyst Alexei Makarkin believes that the less interest of the audience to the message than to the final press conference is easy to explain: “This is a formal event, there’s some intrigue to a mass audience.” “This year the intrigue in the letter of March 1, came in the form of cartoons with missiles, but they were interested in rather elite circles,” he said. Lower popularity of the straight line compared to press conference to explain according to the expert, is more complicated.

Journalists can ask pertinent, uncomfortable questions, but how interesting they are to the ordinary spectator the same question. But in the press conference there is the element dramatized, journalists dress up in costumes, coming up with posters.

A record of interest during the communication of the President with journalists has been recorded in 2014, when the press conference was watched by 14.3% of the capital’s residents are 18 years or older was 1.73 million, or 65.6% of the Moscow audience. High rates were all over Russia: the rating was 13.1%, the share of 61.5%. As noted then, the experts of the “Kommersant”, this is testified not only about the high ratings of the President, but also about the concern of citizens because of the economic situation. Most popular only the first “Direct line with Vladimir Putin” in 2001, which was watched 69% of the capital of the TV audience.

Read also: Putin after the press conference, gave an interview to the 17-year-old Regina Parpieva, fulfilling her dream