French protesters outside the movement at the European level. 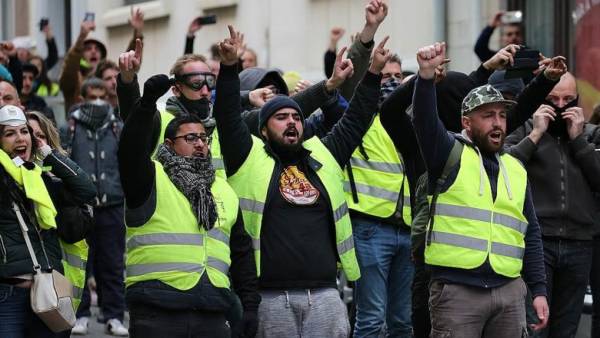 On Saturday there will be already a “sixth act” protests of the French “yellow jackets.” Although about how and where they will be held, there is no consensus even within the movement itself, the administration of Versailles announced in advance that on this day, and the Palace and Park are closed for tourists. The most radical protesters propose to block the borders of France and begin to work together with like-minded people from neighboring countries. With details — the correspondent of “Kommersant” Alexei Tarkhanov.

In the ranks of the “yellow jackets” — a French protest movement that originated in October, on Friday continued to discuss where to meet next Saturday afternoon. Some of the demonstrators in favour to return to Paris and show the government that the movement does not cease. One of the calls and sounds: “the rich will Ruin Christmas.” In turn, Eric Druya, the popular movement party, urged: “get out of the narrow Parisian streets” — and to Versailles! In Facebook interest, they convened the event was over 9 thousand people, and the administration announced that just in case closes and the Palace and Park.

Some of the protesters willing to conclude a truce during the Christmas holidays, others want to wear the yellow vest in the whole of Europe.

To last among others, called upon in open television debates one of the creators of the movement Priscilla Ludoski. She wants the demonstrators went to the border, blocked them and started a joint action with the “yellow jackets” from neighbouring countries. The goal is that at the points where it is proposed to hold protests on the borders with Belgium, Germany and Spain, no truck crossed the border. In the same ether gave the word a small entrepreneur, suffering from the actions of the “yellow jackets”: he was interested in, you know the organizers of the movement, which cause damage to their fellow citizens. But Ms. Ludoski without a shadow of sympathy noticed that progress without the victims can not be. Meanwhile, the victims have a lot: in total, the shares suffered 1843 1048 of protester and police. On the roads during a rally, nine people were killed.

A radical position many of the “vests” explains why their support is not so great as was at the start.