Solstice is one of two days a year when the height of the sun above the horizon at noon, the minimum or maximum. In the year the two solstices — winter and summer. 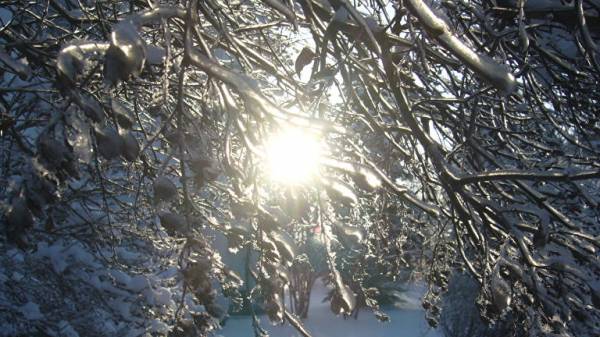 In the winter solstice the sun rises at a minimum height above the horizon.

In the Northern hemisphere the winter solstice occurs on 21 or 22 December, and then there is the shortest day and the longest night. The time of the solstice annually shifted, as the duration of the solar year coincides with the calendar time.

The sun moving along the Ecliptic, at this moment will reach the most remote position from the celestial equator towards the South pole of the world. In the Northern hemisphere of the planet comes the astronomical winter in the southern hemisphere — summer.

For several days before and after solstice, the Sun will “hold the altitude”, like stop for a while, so call these days the standing of the Sun. In the winter solstice, at noon, you can see the most low position of the Sun above the horizon in the Northern hemisphere of the Earth.

In the winter solstice the Sun rises South East and sets in the South-West, describing the short arc in the sky.

In these days of December in the Arctic circle (66.5 degrees North latitude) there comes polar night, which does not necessarily mean complete darkness during all the day. Its main feature is that the Sun rises above the horizon.

At the North pole of the Earth are seen not only Sun, but also of twilight, and the location of the light can be known only through the constellations. Completely different picture in the South pole of Earth in Antarctica this time of day lasts all day and night.

On December 21 the Sun crosses the Meridian of 18 hours and begins to climb up the Ecliptic, starting the path to the spring equinox, when it crosses the celestial equator.

For millennia the winter solstice was of great importance for all peoples of our planet who lived in harmony with the natural cycles and organize their lives in accordance with them. From the most ancient times people worshiped the Sun, knowing that its light and heat affects their lives on earth. For them, the winter solstice symbolizes the victory of light over darkness.