VLADIVOSTOK, December 21 — RIA Novosti. Three of the 90 illegally caught and contained in the Middle Bay in Primorye belugas disappeared, told reporters a number of NGOs, among which the rehabilitation centre of marine mammals, “Seal”, “Ecovita Sakhalin” and others. According to the RIA Novosti source in law enforcement bodies of the region, they could escape. 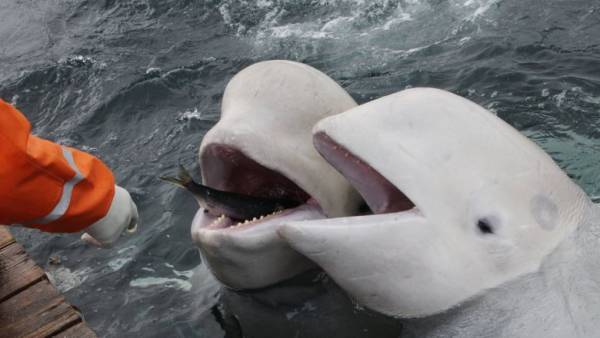 Previously, the press Secretary of the Russian President Dmitry Peskov said that the Kremlin intends to appeal to the Governor of Primorsky Krai Oleg Kozhemyako with the request to solve the issue of white whales and killer whales caught for resale to Chinese aquariums. Famous actress and member of the Advisory Council of the International Fund for animal welfare, Pamela Anderson announced on the page of your Fund, which asked the Russian authorities to ban the capture of orcas and belugas for sale in China. In the Pacific fleet announced that it was ready to help ecologists in the transportation of orcas and Beluga whales.

“In the Bay, the Average has remained 87 Beluga whales, three belugas, presumably, the cubs up to a year, disappeared. Professionals with experience of capture and keeping of Beluga whales in captivity, told that Beluga whales can stay a long time without food.

These animals are very difficult to “be fattened up”, i.e. to force to eat dead fish instead of hunting for a living, or instead of mother’s milk, if young of the year. Some white whales not begin to feed in captivity.

From the practice of previous years of all the Beluga whales were caught in August, brought in cages in September, and in December those who have not started there, began to die,” — said in the message. Environmentalists note that the estimated allowsyou, mortality of belugas in captivity in the past years was about one third.