A third rare Scotch whiskey was a fake. Its cost is estimated at 3.5 billion rubles 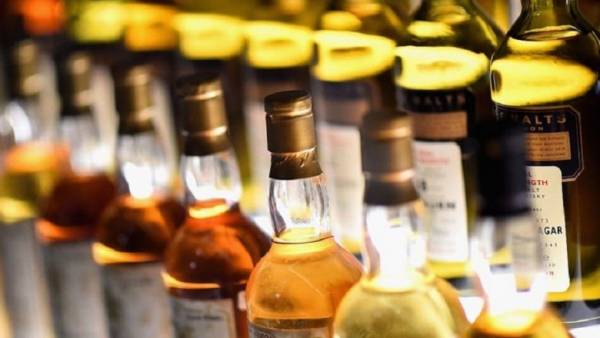 21 of the 55 bottles tested contained fake drinks or really aged whiskey, but younger than stated on the label. We are talking about a rare collector’s specimens.

The analysis was carried out in a Scottish University center for the study of ecology (SUERC) in East Kilbride. For this study, we used radiocarbon analysis.

SUERC researchers measured the radioactive isotope of carbon in alcohol from each bottle to determine the actual age of the whiskey.

Samples for analysis were transferred to a laboratory company Rare Whisky 101 (RW101), trading in elite alcohol. According to its representatives, the need for the tests was dictated by a growing concern about the proliferation of fake whiskey in the secondary market.

The bottles were selected at random from whiskey, presented at auctions, in private collections and at dealers.

Last year, the company found that sold at the bar of one of the Swiss hotels serving Scotch whiskey, which cost the client in a record 7,600 pounds 20 grams, was a fake.

Chinese millionaire thought that paying for single malt whiskey 1878, but then I questioned its authenticity. Later analysis showed that the proposed whiskey connoisseur, the drink was made in 1970, not even a single malt.

Among the fakes of rare whiskey, found this year, a bottle of “Ardbeg 1885” purchased by a private owner and purchased at auction whisky “Thorne’s Heritage of the early XX century”.

According to representatives of RW101, single malt (produced from alcohols of one specific distillery) whisky from all 10 bottles, dated 1900 and earlier years, and participated in the study turned out to be fake. The company said that the cost of 21 bottles of fake whiskey, if their contents are true, it would take about 635 thousand pounds (55 million rubles).

According to experts RW101, to date, of the total amount of whiskey, offered in the secondary market and in private collections, the drinks amounting to about 41 million pounds (3.5 billion rubles) are fake. This amount exceeds the aggregate value of the UK market auction of whisky in RW101 at the end of this year is estimated at 36 million pounds (3.1 billion rubles).

According to one of the founders of RW101 David Robertson, the vast majority of sellers don’t know what their product is fake. Each bottle of rare whiskey should be considered fake until until proven its authenticity, especially when talking about single malts, he said.