A group of 16 countries of the Organization for security and cooperation in Europe (OSCE) on Thursday, December 20, urged Russia to “ensure full compliance of all the Chechen authorities, including law enforcement agencies and security services, the internal legislation of Russia and its international obligations in the field of human rights”. 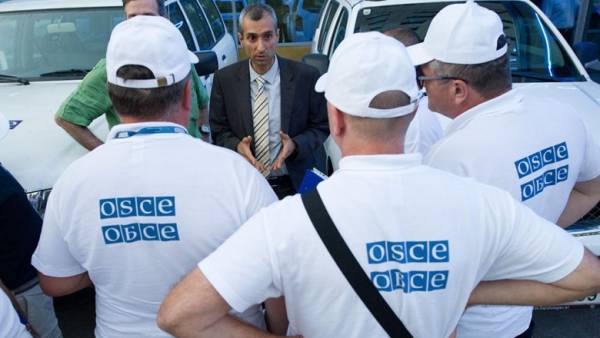 This is stated in the joint statement of the countries—members of OSCE expert report of the “Moscow mechanism” of serious human rights violations in Chechnya. The report was prepared by an Austrian lawyer, Professor in international law Wolfgang Benedek — he is responsible for the so-called Moscow mechanism, which was launched against Russia in November of this year. The statement is signed by the following countries — Belgium, UK, Germany, Denmark, Ireland, Iceland, Canada, Latvia, Lithuania, Netherlands, Norway, USA, Finland, France, Sweden and Estonia.

In particular, urge Russia to launch an investigation into the actions of the government of the Chechen Republic against members of the LGBT community.

It also refers to the case of alleged violations by Maxim Lapunov, native of the Omsk region, which worked for two years in Chechnya and spoke about the persecution by the authorities of the region.

In addition, asking Russia “to immediately release on bail the Director of the office of the human rights centre “memorial” in Chechnya Ouba Titieva in accordance with the recommendation of the Rapporteur of the Moscow mechanism of the OSCE.

The authors of the joint statement of the countries—members of OSCE have noted that in the past two years, “repeatedly urged the Russian Federation to conduct an effective and thorough investigation” of cases of “serious violations and abuses of human rights in Chechnya,” and asked the country to inform the permanent Council of the organization “about its investigations, including by providing answers to specific questions raised in the framework of the “Vienna mechanism” (human dimension)”. Russia, despite requests, “has failed to provide substantive answers,” the statement said.

The initiative from the beginning has caused sharply negative reaction of Moscow.

As it became known””, on Thursday at the meeting of the OSCE permanent Council (it is, as usual, held behind closed doors) , Russia’s permanent representative at the organization of Alexander Lukashevich said: “the Sharp critical tone of the review and the biased conclusions based on information from questionable sources indicate that the original intentional politicization of this topic”.

In preparing the report, the main emphasis was on some “evidence” of anti-Russian NGOs and is known for its partisanship of individual members of PACE. All of this suggests a pre-planned adjustment of the document by its “customer” parameters.

Mr. Lukashevich noted that Moscow, “despite repeated questions of a clarifying nature, have not received any list of names of alleged 27 victims of the so-called extrajudicial killings, a statement of the specific circumstances alleged incident with them.” A statement about the case Ouba Titieva, according to the Russian diplomat, “can be considered as an attempt to exert pressure on the Russian judiciary, undermining the independence of the judiciary.” “The task to promote a theme for unsubstantiated accusations of Russian higher professional objectivity and desire to understand what happened”, — concluded Alexander Lukashevich.

The “Moscow mechanism” to study the situation with human rights in Chechnya intensified in early November, his use of spoke 16 countries—members of OSCE. It was approved in 1991 in Moscow (hence the name) and implies the beginning of work of individual mission organizations in the region. Such a mechanism had previously used seven times, most recently in 2010 in Belarus after the presidential elections. Once the “Moscow mechanism” activated Russia in 1999 on the issue of human rights violations during NATO’s military operation in the former Federal Republic of Yugoslavia.