BRUSSELS, 17 Dec — RIA Novosti. Prime Minister of Ukraine Volodymyr Groysman said on Monday in Brussels the words of foreign Minister Sergei Lavrov about the upcoming Kiev provocations, saying the presence of the head of EU diplomacy, that there are no such plans. 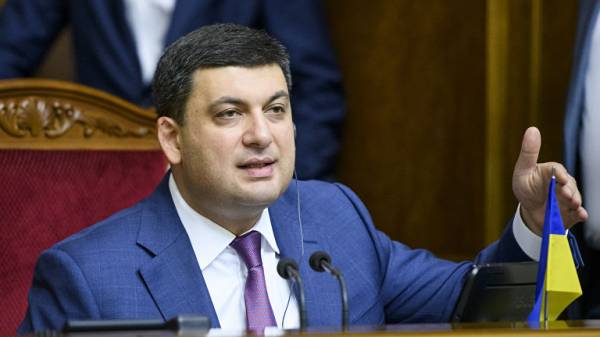 Earlier, the Minister of foreign Affairs of Russia Sergey Lavrov said that the President of Ukraine Petro Poroshenko is preparing a provocation at the end of December on the border with Russia. If Kiev will go to the provocation, you will receive a response, Lavrov said. The Russian foreign Minister said that the provocation on the border with the Crimea the President of Ukraine is discussing with its “Western curators and Trustees”. According to reports, the Minister said, Poroshenko advised to maintain the fighting of low intensity, to keep you “screaming in the propaganda field that Russians come to Ukraine,” but not to translate military actions in a phase, followed by full answers.

“Totally inadequate plan. Ukraine had no provocation was not planned,” — said Groisman, whose words were translated from Ukrainian to English.

He also said that he expects the Russian Minister’s efforts to release the detained Ukrainian sailors.

On Monday in Brussels held a meeting of the Association Council EU-Ukraine. At the final press conference was attended by the Prime Minister Vladimir Groysman and the head of EU diplomacy Federica Mogherini.

Three ships of the Ukrainian Navy 25 Nov violated the border of Russia, included in the temporarily closed waters of the territorial sea of the Russian Federation and moved from the Black sea to Kerch Strait. They maneuvered in a dangerous manner, did not obey the lawful demands of the Russian authorities. Ships with 22 sailors and two employees of SBU were detained, three of them were injured, they were hospitalized and received medical care, their life is not in danger. In relation to detainees initiated a criminal case on illegal crossing of the state border.

Russian President Vladimir Putin had earlier called the incident in the Black sea as a provocation, noting that among the crew members of the Ukrainian courts, violated the border of Russia, were two employees of the security service of Ukraine, who actually led the operation. Putin stressed that Russian border guards had performed their functions for the protection of the state border. According to him, the provocation in the Black sea tied to a low rating of the President of Ukraine ahead of the elections.