In amber about 100 million years old, found in Myanmar, very well preserved ancient feathers — and scientists were able to study in detail their structure. It turned out that discovered feathers like no one of those of today’s birds. 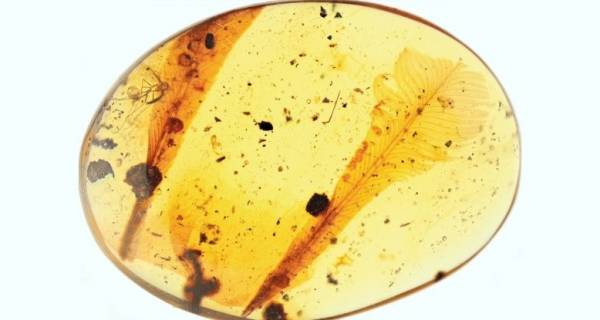 It long feathers that continued the tail of their ancient owners, and were sometimes even bigger than the birds. As many modern birds also often have long tail feathers that is used, for example, to attract a partner, it was assumed that ancient birds that lived in the Cretaceous period, are the feathers were needed for the same purpose. However, a detailed study of the tail feathers of those birds was not previously possible.

This was changed by the sample, very well — in three dimensions — preserved in ancient amber from Myanmar. In these feathers, as noted, dominates the core of the feather (the rachis), but it is quite different from that of modern birds. Researchers indicate that the rachis of the ancient feathers found in Myanmar, for its unusual form and subtlety (thus, by assumption, the sprouting feathers of these ancient birds didn’t have to spend a lot of energy). Scientists suggest that these feathers easily separated and it was not very diverse; thus, it is possible that they were used to attract a marriage partner, and for protection, but was also useful as visual cues.

However, as noted, a strange form of rakhis ancient feathers raises a lot of questions: for example, scientists can not yet say, there are these feathers from the usual or passed some other evolutionary path. To answer this and other questions, the experts will conduct more research.