Arctic Mirage as the reason for discoveries. Baron toll and Kolchak in search of Sannikov Land

Island in the Kara sea is named Kolchak, but recalls is not about the Civil war, and about the scientific feats of the future Admiral, in 1900-1902 years exploring the Arctic seas and discovered new lands. 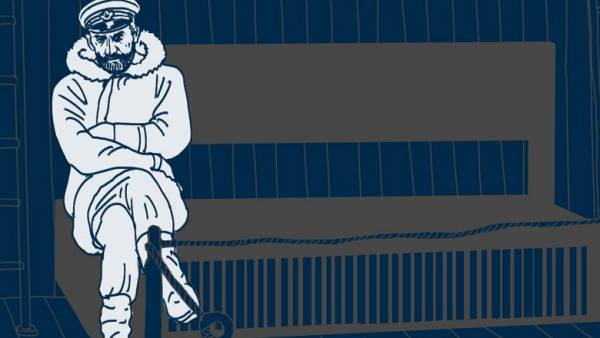 Desert island in the Kara sea was opened in 1901 and later named after its discoverer — Lieutenant Alexander Kolchak. In the Russian polar expedition the first years of the XX century Kolchak made real and recognized scientific feats, explored the Arctic seas and discovered new lands, and then returned there in search of missing comrades, tried to find the mysterious Sannikov Land.

The myth of the Sannikov Land

The myth of the existence of places where the Arctic becomes a likeness of the tropics due to the outside thermal waters, known by the science-fiction novel by Vladimir Obruchev “Sannikov Land” (1924) and the domestic film of the same name in 1973. And in the XIX — early XX century, the polar researchers have seriously believed in the existence of the land of Arctida, which Russian industrialist Yakov Sannikov allegedly seen in the area of the new Siberian Islands, but was unable to approach her. The quest of this land, which is even marked on maps, were listed among the tasks of the Russian polar expedition and cost the life of its leader. The end date of the expedition is conventionally considered 18 December 1902, when remaining on the island of New Siberia, a group of researchers led by zoologist of Birula moved to the continent.

Russian polar expedition of 1900-1902 years were filled with Imperial Academy of Sciences to study the Arctic to the North of the Novosibirsk Islands and estimate the possibility of penetrations in a single navigation of the great Northern route from Arkhangelsk to Vladivostok.

Especially for the expedition in Norway was bought a three-masted whaling bark who went on a journey across the Arctic under the name “dawn”. The commander of “Dawn” was Lieutenant Nikolai Kolomeitsev, his assistant — Lieutenant Fedor Mathisen.

A group of researchers under the leadership of geologist Eduard toll went in zoologist and photographer Alex Birula, magnetology and astronomer Friedrich Seeberg, bacteriologist Herman Walter, a geologist Konstantin Volosovych.

The group as a hydrographer, cartographer, hydrologist, and magnetology was also 23-year-old Alexander Kolchak — he combined the duties of a naval officer with a scientist.

In harness with the dogs

21 Jun 1900 Zarya weighed anchor in St. Petersburg. The boat was loaded with the tools to research, chronometers and explosives, books for the library and a stock of coal of the highest quality. Also on Board took 60 dogs, two mushers — Peter Strizheva and Stepan Rastorgueva. In September 1900, the boat stopped for the winter near the nordenskiöld archipelago in the Taimyr lip and stood there until August 1901, and the members of the expedition, meanwhile, conducted their research on ice and on land.

In April Kolchak and toll, accompanied by sailors went on the sled examine the Taimyr Peninsula, passing the day at 20 km, and People were hardier dogs, and they often had themselves to harness sled dogs and haul supplies and equipment. Throughout the 500-mile ice path Kolchak and toll conducted a topographical survey of the area to clarify the contours of the coast, described by previous researchers.

To fully appreciate what it was like to walk this path and stay alive, maybe the only person there. Geologist Gennady Carwhen worked on the nordenskiöld archipelago in 1979 he was commissioned to carry out the audit investigation of deposits of beryl — one of the most expensive minerals:

I worked there, where in 1900-ies wintered schooner “Zarya”. Seeing the remains of the camp and some buildings, I couldn’t understand, and only on arrival in Leningrad I learned from the bibliographer of the all-Union geological library, which published the diaries of the toll, which Kolchak carried out of the wintering — of which all my knowledge about the expedition.

About the conditions in which I was researchers those places Charukhin said: “You think it’s smooth surface? This pack (perennial approx. TASS) ice, hummocks, is the crack in the ice… got to go up and down, overcoming obstacles. To go on the tundra very difficult, and if there is no sun, and the compass is lying — there is a terrible magnetic anomalies — are almost on a whim. And living conditions — it is palatochka, where they all could sleep — frozen, hungry. And that’s quite a feat, I believe. And I don’t know who can, I say without the slightest exaggeration”.

After sliding the campaign of 1901, a toll was named after Kolchak, one of them Islands in the Taymyr Gulf. In 1908, Kolchak island was mapped, in 1937 it was renamed, but in July of 2005 the historical name of the island was restored.

In honor of the participants of the Russian polar expedition was named several newly discovered objects, including Rastorguev island, Strait Birulya and others.

The participants of the expedition toll, being in unknown places, not feel cut off from the world and even found a way to send letters to St. Petersburg, with the understanding that they can go for a year.