Putin said the INF Treaty, the unilateral disarmament of the USSR

Moscow. 18 Dec. INTERFAX.RU — the Treaty on intermediate and shorter-range missiles (INF Treaty) for the USSR became a de facto unilateral disarmament, said Russian President Vladimir Putin, adding that he did not understand the reasons for signing the document. 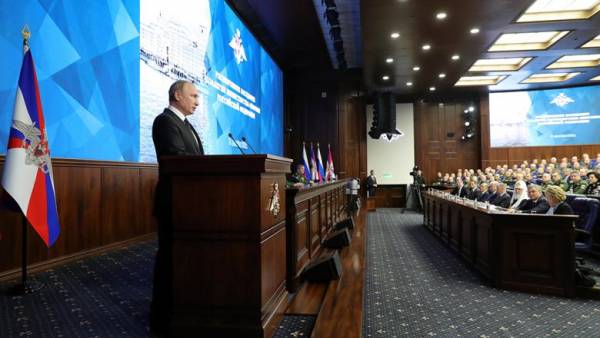 Speaking at the Collegium of the defense Ministry of Russia, Putin decided to stay on the topic of possible U.S. withdrawal from the INF Treaty, noting that it is a relevant question, “attracting the attention of the public in our country and in the world.”

The Russian President reminded that the agreement was signed in 1987 and provided for the elimination of intermediate-range and shorter-range from 500 to 5 thousand km.

He stressed that in case of US withdrawal from the INF Treaty Russia can modernize the system of air and sea-based, placing them on the ground.

of the Missile Arsenal of China. What are they afraid of US?

“Let’s see how it will happen. By and large we’re all there, but if something happens than trying to scare us, well, we have to respond appropriately,” — said Putin.

He added: “As you know, if we have air and sea-based such systems is probably not too difficult will be to conduct relevant research and development and put them on the ground if necessary”.

Putin noted that the medium-range weapons “the Dagger”, which appeared in Russia, does not violate the INF Treaty.

Unique, which in the world is — 2 thousand km “Dagger” supersonic weapons do 10 swings, that while no one. Yes, we have it, but it is not a violation of the Treaty on the elimination of intermediate-range and shorter-range. Where is the violation? Is the system located on the aircraft, not on-site.Mr Putinprime of the Russian Federation

The United States, putting the “aegis” in Romania, and now in Poland, in direct violation of the INF Treaty.

“And the shock drones, which correspond to all characteristics of intermediate-range and shorter-range, are used in full — and nothing else. That is directly violated. And we make some hypothetical, unfounded claims,” Putin said.