The foreign Ministry called for the preservation of the INF Treaty

MOSCOW, 17 Dec — RIA Novosti. Moscow is categorically against the collapse of the Treaty on intermediate and shorter-range missiles (INF Treaty), it is necessary to save, for that the Russian Federation intends to pass a resolution in the UN General Assembly, said the Minister of foreign Affairs of Russia Sergey Lavrov. 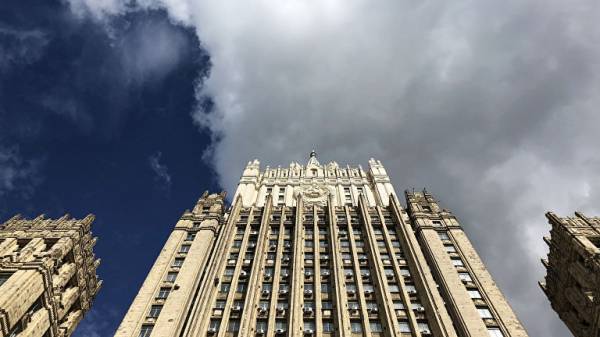 He noted that Moscow is against the US initiative to extend the agreement for China, North Korea and Iran.

We advocate that the Treaty must be preserved, it is the entire international community has repeatedly recognized as one of the cornerstones of international security and strategic stability.

“We are literally today, the UN will be the second time trying to hold a General Assembly resolution that would have called for the preservation of this Treaty,” — said the Minister on radio “Komsomolskaya Pravda”.

He added that Russia presented the US concerns on the implementation of the Washington INF Treaty. These concerns, said Lavrov, based on the specific facts — in the military-technical developments, including in connection with the deployment of US bases in Romania and the planned deployment in Poland.

He noted that Moscow hears statements American colleagues that the only path for Russia to save the contract — to destroy the rocket 9М729 that Russia allegedly created in violation of the range specified by the contract. In response, defense Minister Sergei Shoigu formally invited the Pentagon chief James Mattis to meet and start a professional conversation, but the U.S. continues to move away from professional discussion on the implementation of the INF Treaty.

USA didn’t even answer, at least formally recognized that such an invitation is received. If they did, it would be forced to explain why they are moving away from the professional conversation and continue to act in the notorious style, highly likely, you just have to repent, you are to blame.Sergei Europeanists of foreign Affairs of Russia

In recent years Moscow and Washington have regularly accused each other of violating the INF Treaty. Russia has repeatedly stated that strictly complies with its obligations under the contract. The Minister of foreign Affairs of the Russian Federation Sergey Lavrov noted that Moscow has very serious questions to Washington concerning the implementation of the Treaty by the United States.