MOSCOW, 17 Dec — RIA Novosti. Plans to expand the integration of Russia and Belarus in the Union state format is conceptually reflected in previous documents, said the press Secretary of the President Dmitry Peskov. 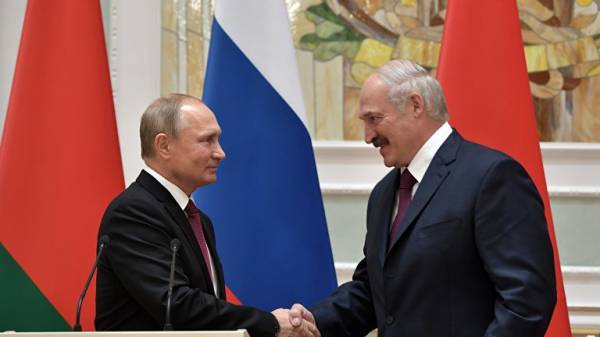 However, he noted that the theme of uniting the two countries with the subsequent presidency of Vladimir Putin in a single state is not on the agenda.

“It was not discussed, and this is not no talk,” said the spokesman.

He recalled that Russia and Belarus are cooperating in the format of the Union state.

“Belarus is our ally, with a capital”, — said Peskov.

“The threat of loss of independence.”

Last Friday the President of Belarus Alexander Lukashenko said that the country’s sovereignty is sacred, and its loss will not. According to him, the tax maneuver in the Russian oil sector threatens the independence of Belarus.

“You can just say — get oil, but you let destroy the country and join Russia”, — said the head of state.

Lukashenko said that in any case, such deep integration should be voluntary. He stressed that Minsk and Moscow always find a compromise on contentious issues, and “integration Belarus ‘ position unchanged”.

President of Belarus plans to meet with Putin on December 25. The leaders will discuss a tax maneuver in the oil sector.

On the eve of several media, citing a source reported that Lukashenko held a closed meeting with senior officials to discuss the theme of independence in “the face of pressure from the Russian side”.

It was noted that the meeting decided “to stand for independence.” Press Secretary of the Belarusian President Natalia Eismont stated that Lukashenka had not held such meetings.