The creation of the “Ukrainian Autocephalous Church”. Help

In April 2018, the representatives of the unrecognized Orthodox churches of Ukraine — Kyiv Patriarchate (UOC-KP) and the Autocephalous Church (UAOC), Ukraine’s President Petro Poroshenko and the Verkhovna Rada of the country sent to the address of the Patriarchate of Constantinople a petition for the creation of the “Autocephalous Church.” 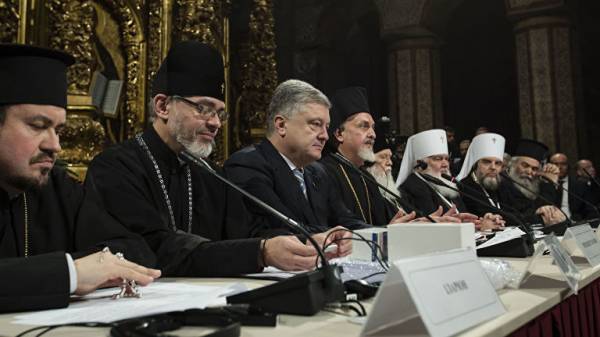 9 APR 2018 Petro Poroshenko met in Turkey with Patriarch Bartholomew and the members of the Synod of this Church, then said that “Ukraine is closer than ever to having its own Autocephalous national Church. This is testified by the position of the Ecumenical Patriarch and members of the Synod.”

22 APR 2018 President of Ukraine it was stated that the Patriarchate of Constantinople begins the procedure necessary to create the uniform local Autocephalous Church.

In July 2018 in Kiev took place the celebration of the 1030-th anniversary of the baptism of Russia, where a delegation of Constantinople, read out a message from Patriarch Bartholomew, saying that the Church of Constantinople “took the initiative to restore the unity of the Orthodox believers of Ukraine, with the ultimate goal to give the Ukrainian Church autocephaly”.

December 15, 2018 , the President of Ukraine Petro Poroshenko announced the creation of the “Ukrainian Autocephalous Church”. The Primate of the “new Church” in Ukraine, was elected “Metropolitan” non-canonical Church structures Epiphanius, who was chosen for the “unification Council” in Kiev.