Zyuganov and Zhirinovsky asked Putin to resume meetings with them

The leaders of the factions of the liberal democratic party and the Communist party Vladimir Zhirinovsky and Gennady Zyuganov asked Russian President Vladimir Putin to restore the format of regular meetings with them, according to RBC. 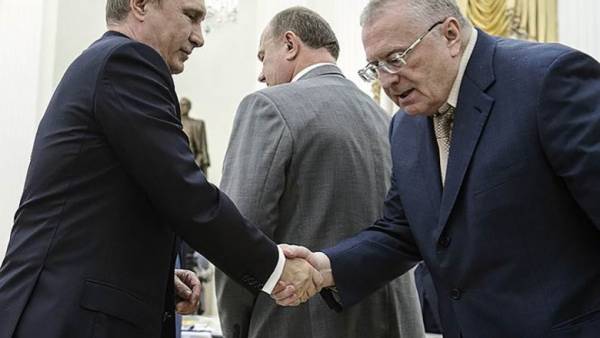 The request was announced on December 12 in the Kremlin at a reception in honor of the 25th anniversary of the Constitution.

As told to the edition a source close to the Kremlin, Putin promised to give the corresponding order of his administration. According to the press-Secretary of President Dmitry Peskov, Vladimir Putin promised to think about it.

Mr. Zyuganov told RBC that the former format of the meetings will be restored. “This need is long overdue, and overdue. It is necessary for the President and the heads of factions. The more complex the situation, the need to meet more regularly. We need to know the priorities,” he said. Gennady Zyuganov noted that “format, when you are about thirty people, not allows you to discuss important issues”.

The last time the President met with the leaders of Duma factions in September 2016.

In December 2016 the format was changed to a broader one. The meeting involved the leadership of both chambers of Parliament, heads of parliamentary factions and chairmen of committees of the state Duma and the Federation Council.