The U.S. Senate launched an attack on Riyadh

Lawmakers have called for an end to military aid to Saudi Arabia. 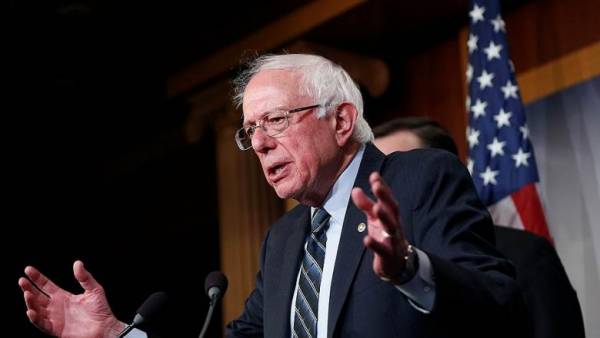 The U.S. Senate adopted a resolution on ending us military aid to Saudi Arabia, which conducts operations in Yemen. While this is the mildest of the possible responses of us senators in the murder of a Saudi journalist Jamal Khashoggi. The decision of the Senate is Advisory in nature and does not mean that Washington will abandon military cooperation with Riyadh. President Donald trump still does everything in order not to spoil relations with Saudi Arabia. It is noteworthy that the document was adopted on the same day when the UN first 2.5 years were able to achieve progress in the settlement of the Yemen conflict.

Resolution prohibiting the participation of American armed forces in the conflict in Yemen, with the exception of operations against the terrorist group “al-Qaeda” (banned in Russia), was approved Thursday by the U.S. Senate. We are talking about the ban on refueling aircraft, the Saudi-led Arab coalition, and also for the exchange of intelligence and data on potential targets. Prohibits any U.S. military involvement in the conflict in Yemen without the sanction of Congress.

The result of the vote has not affected the last Thursday in Congress a closed briefing by Secretary of state Mike Pompeo and Minister of defense of Jim Mattis, who support rate of Donald trump at strengthening cooperation with Riyadh.

The war in Yemen began in March of 2015, when the forces of the Arab coalition invaded the country under the pretext of return of power to the ousted President, Abd-rabbu Mansour Hadi, who took refuge in Riyadh. The Houthi movement “Ansar Allah” and the core of former party “General people’s Congress” control about 20% of the territory of Yemen, including the capital Sana’a. This territory is home to about 80% of Yemen’s population. According to published this week online by the Armed Conflict Location & Event Data Project data, from January 2016 to November 2018 in Yemen killed more than 60 thousand people. It is more than six times the latest estimate of the United Nations. From hunger in Yemen, according to the UN, affects 14 million people — about half the population of the country.

Washington had from the outset supported the Arab coalition, but gradually public opinion began to change. However, if not for the murder of Jamal Khashoggi, opponents of US involvement in the Yemeni conflict is unlikely to be the majority vote in the Senate.Murder mystery Saudi журналиста04:47 (GMT)Reuters: the U.S. Senate was blamed for the murder of Kalkaji Saudi принца12 decabrachia believes that the case Kalkaji should not get away with Аравии3 декабряNYT Saudi: Saudi authorities followed Hackage with the help of Israeli computer program

According to the initiator of the resolution independent Senator Bernie Sanders, the intervention of Saudi Arabia in the Yemeni conflict has resulted in “the worst humanitarian disaster in the world.” “For the United States it’s time to stop supporting the leadership of Saudi Arabia, a brutal regime, which recently killed journalist-dissident and respects human rights”, — the Senator said on the eve of the vote.

In late November, Donald trump has made it clear that the US intends to maintain relations with Saudi Arabia at the same level despite the killing of the Saudi Consulate General in Istanbul journalist Jamal Khashoggi. According to the President, the truth about this case can never know, whereas good relations with Riyadh in the interests of the United States.

However, senators continue to demand that Donald trump clarify the question of involvement in the murder of the crown Prince of Saudi Arabia Mohammed bin Salman. After the meeting a small group of senators from CIA Director Gina had Haspel they have no doubt the fault of the crown Prince.

So Republican Senator Bob Corker assured: if Mohammed bin Salman appeared before the court, “he would have been convicted for half an hour”.

In the end, without waiting for the decisions of the White house, the senators considered several options of how to punish Riyadh. In addition to the adopted on Thursday the document was discussed the resolution condemning Mohammed bin Salman for the murder of the journalist and to suspend the sale to Saudi Arabia of American weapons. The first version of the resolution was submitted to the Senate on 5 December at the initiative of the Republican Lindy Graham. The document expresses “high confidence” that the Prince was involved in the murder. The senators believe that Mohammad bin Salman al Saud must be prosecuted like other participants in the murder. The document also includes requirements for Saudi Arabia “to hold direct talks with the representatives of the movement of Houthis to end the war in Yemen”, “to restore diplomatic relations with Qatar”, torn in June 2017, “the immediate release of blogger Raif Badawi, activists of the movement “For the rights of Saudi women” and other political prisoners.”

While the senators were limited to milder version that affects only US involvement in the Yemeni conflict. However, according to experts, it has more symbolic value is Advisory in nature and unlikely to affect the Yemeni conflict. At least because in early November, the Arab coalition has refused us aid in the refueling of aircraft.

Ban USA to refuel coalition will not change the situation, told “Kommersant” a senior researcher of the Institute of Oriental studies of the Russian Academy of Sciences Sergei Serebrov.

All that is possible to bomb, has long been destroyed, a small country, also located in the comprehensive closure regime since the war began.

It is noteworthy that yesterday the UN has achieved important progress in the settlement of the Yemen conflict. In Sweden, the first in 2.5 years of negotiations between the conflicting sides reached a ceasefire agreement in al Hudaydah, where is the main port of the country. Continued escalation in the area could aggravate the humanitarian catastrophe. According to the UN Secretary-General antónio Guterres, the agreement “opens the way to progress in the negotiations in the future.” Another positive result was the agreement on the exchange of prisoners. Also discussed is the opening of the airport of the Yemeni capital of Sana’a for international flights.

On the one hand these agreements are encouraging, but they should be treated with caution, the fighting was not interrupted at the time of negotiations, the agreement on the cease-fire applies only to Hodeidah.Sergey Serebrovskii researcher, Institute of Oriental studies

He stressed that the formation of the transitional authorities is the Central theme of negotiations. “While progress is not achieved, the success of the Swedish meeting will remain shaky. The escalation of military actions of the coalition in all the areas simultaneously with the negotiations — a bad sign,” said the expert.

Sergei Serebrov believes that “the domestic conditions in Yemen have long ripe for settlement”. “It is the position of the US is blocking this process, both on the ground and in the UN security Council,” he said. “If the United States adopted a resolution limiting Saudi Arabia’s ability to continue the war — that would be another matter” — said the expert. He noted that to talk about change in Washington’s position would be possible only after the USA’s refusal to classify Houthis to “Iranian agents”, as well as the termination of the evaluation of the Yemeni conflict through the prism of pressure on Tehran. However, this is unlikely to happen, said the expert. Only on Wednesday at a UN security Council meeting on nuclear nonproliferation U.S. Secretary of state Michael Pompeo once again accused Iran of trying to foment conflict in Syria and Yemen.