The Minister of Indian Affairs

How did you start and what the outcome of the visit of Sergei Shoigu to new Delhi. 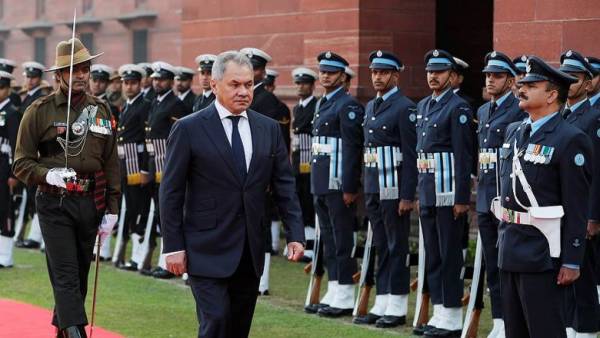 On Thursday in Delhi on 18-th meeting of the joint Russian-Indian intergovernmental Commission on military-technical cooperation (MTC). As it became known””, in addition to a number of military exercises Russia and India have confirmed their intentions to establish a joint production of Kalashnikov assault rifles, as well as discussed the prospects of modernization of MiG-29 fighters and aircraft carrier Vikramaditya. However, until the spring of 2019 to wait for progress in the field of MTC is not: before the parliamentary elections, the Indian authorities are exclusively engaged in domestic agenda. With the details from the Delhi correspondent of “Kommersant” Alexander Djordjevic.

The session, co-chair of which the Russian side is the Russian defense Minister Sergei Shoigu, was preceded by a Protocol meeting with the participation of the guard of honor at the walls of the defence of India, and after negotiations in narrow format. Opening them, Sergei Shoigu in conversation with his colleague Nirmala, Seetharaman said that the level of cooperation between the two countries in the field of transfer of technology of weapons “unprecedented”, and cooperation occurs in all, even the most “sensitive” spheres of military technical cooperation, “despite external pressure.”

To argue with him Mrs. Seetharaman did not, in about the same tones of cooperation between the two countries was described by Russian President Vladimir Putin during his visit to India (held on October 4-5).

Opening the meeting, Mr Shoigu highlighted the presence of solid contracts for anti-aircraft missile systems s-400 “Triumph” (regimental five sets) and the frigates of project 11356 (two frigates will be delivered to India, and another two collected at the local shipyards). Those signing in the fall of 2018 reinforcing India’s position in the annual portfolio of orders: together they are estimated at $6.5 billion.

Developing this theme, Sergei Shoigu said that he had changed the IPC structure: there is a separate working group for military cooperation. As explained by the Deputy Minister of defence of the Russian Federation Alexander Fomin, the meeting discussed the program of cooperation between Russia and India by 2030, and under the theme of military cooperation the basis for the development was named joint activities under the auspices of the SCO “Peace mission”, “Indra”, the international Military games and the training of Indian specialists in Russian universities.

According to the Kommersant source in the defense industry, Russia and India there were some large projects that have not yet completed. It is a joint enterprise of the concern “Kalashnikov” with the Indian Ordnance Factory Board, the story of the Ka-226T, as well as a number of questions on calculations and modernization of existing products, in particular, MiG-29 and the aircraft carrier Vikramaditya. However, according to another source “b” in the defense Ministry, the topic of settlements for delivered products remained in the background — that was the wish of the host party. But the topic of after-sales service, according to him, has become a major meeting of the IGC in particular, the modernization of the previously delivered MiG-29 to the level of MiG-29UPG of the Indian air force received many complaints, but now they have recognized a significant improvement. Was raised on the IPC and topic SP of the concern “Kalashnikov”. One of the interlocutors “Kommersant” said that since the visit of the Indian delegation to the plant in Izhevsk has passed already almost year, but a firm contract has not been signed: the future of SP is unknown, is not even worked out the scheme of ownership, although a political solution is reached by both parties.

According to “Kommersant” on Thursday could be a meeting of Sergei Shoigu with Prime Minister of India Narendra modi, but she has not been confirmed by the Indian side. As explained by one of the interlocutors of “Kommersant” close to the Embassy, “simply does not match schedule”. According to him, the question only in the internal Affairs of Mr modi and his party: “India is already thinking about elections, there is no place for superfluous meeting with foreigners, even such important. Party, the premiere was not as good as expected, and they have something to do with it”, — he concluded, Recalling that over the last month in India has already arrived the Secretary of security Council Nikolay Patrushev and the speaker of the state Duma Vyacheslav Volodin.

But wait a solid signing arms contracts before the parliamentary elections: the informants are convinced that India is largely occupied with themselves and their internal problems. However, this critical delay on the relations in military-technical cooperation between the countries is not affected. So, it seems, believes Vladimir Putin, who invited Mr modi to take part in the Eastern economic forum 2019 in Vladivostok as the chief guest.