MOSCOW, December 12 — RIA Novosti. Lander InSight received the first full-fledged selfie, photographing myself with a camera mounted on its robotic arm. This picture will help scientists to select the site for drilling operations, according to the jet propulsion Laboratory of NASA. 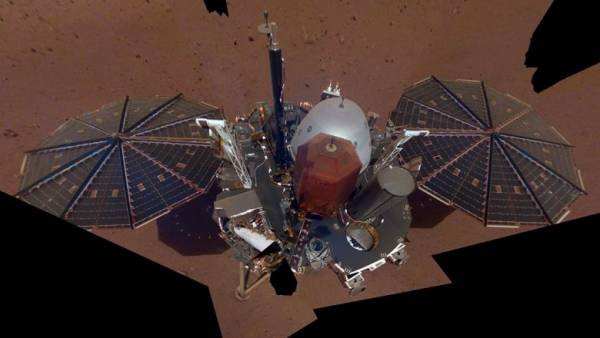 The descent module InSight made in early December a successful landing on the plain of Elysium near the equator of Mars. He became the official successor of another probe-geologist NASA lander Phoenix, stranded on Mars in may 2008 for the search of traces of life and water in the soil.

On Board will be working seismograph and geophysical thermometer which will be installed in a five-meter hole to measure the temperature of the interior of Mars. One of the instruments of the probe will accurately track the fluctuations of the planet’s rotation, which will help to determine the distribution of mass in the planetary interior and better understand its internal structure.

Initially, NASA had planned that the InSight will go to Mars in March 2016. Due to the malfunction of the seismometer SEIS, made by the French engineers and scientists commissioned by CNES, the launch was shifted to the first half of 2018.

The probe has successfully deployed solar panels, advanced hand and now is preparing to receive the first detailed photographs of the Martian surface and select the point where will be installed a seismometer and drill-Krot HP3. Researchers hope all the operations for their installation and drilling will be completed in about three months.

The first such image was taken this week in the form of a kind of “selfies” of the probe. It is a collage of 11 separate images hand InSight and glued a computer program created by the developers of the Mars Curiosity Rover.

Another series of five dozen photographs of the Martian surface have been combined into a kind of map of the area, which will help the probe to select the optimal location for installation of the seismometer and drill. In the near future scientists will select the most interesting and safe areas of the ground and begin to examine them with a hand lander.

See also: NASA was the first to record the noise of the wind on Mars