Moscow. 4 Dec. INTERFAX.RU — Russia is complying with the terms of the Contract on rockets of average and shorter-range missiles (INF Treaty) and Washington knows about it, said Tuesday the official representative of Russian foreign Ministry Maria Zakharova. 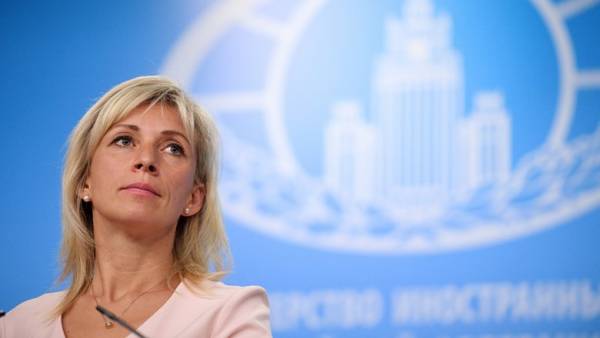 “Russia strictly observes contractual provisions and the American side is known,” she said, commenting on the statement by Secretary of state Mike Pompeo, who announced that after 60 days, the United States will withdraw from the Treaty.

Member of the Federation Council Committee on defense and security Franz Klintsevich said that the missile 9М729, which claim the US and NATO, does not violate the contract.

“We can invite personally Pompeo on tests 729, and he will see that the missile flies at 498 km and does not violate the Treaty on intermediate-range and shorter-range”, — he said. The Senator believes that the US is using these accusations as a pretext to withdraw from the Treaty.

In turn, the Chairman of the Duma Committee on defense Vladimir Shamanov said that Russia will not react to the U.S. charges.

Russia is not the country where you can put ultimatums. Russia has also claims against the United States, which they did not answer, so we are not going to their imaginary charges to answer.

In addition, the head of Committee has reminded that “Russia has repeatedly offered US to sit at the negotiating table, which they do not, then, afraid of something”.

The Treaty on intermediate-range missiles was signed between the U.S. and the Soviet Union in 1987, provides for the rejection of production, testing and deployment of ballistic and cruise missiles, ground-based medium (1000 to 5500 km) and shorter (500 to 1000 km) range.