In Russian courts may receive a uniform dress code for visitors

According to the lawyers, now the courts are showing excessive initiative in this matter. 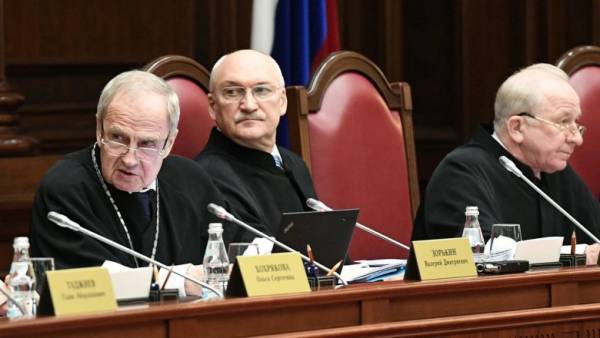 The judicial Council will develop model rules of stay of visitors in the courts, said Tuesday its Chairman Victor Momotov. This is due to the fact that the problem of respect for the court in recent years has become particularly acute, he explained.

If judicial independence is an absolute value, then respect for the court — specific behavior, which should be prescribed and observed by all without exception.

Of particular importance in such matters is given to the behavior of judicial representatives and lawyers, said Momotov: they in many respects form an opinion about the judicial system. In this regard, the judges “there is reason to expect that lawyers will contribute to the proper administration of justice and maintain its credibility,” he added.

Earlier it was reported that the Ministry of justice sent to the judicial Council a letter asking to develop common approaches to the establishment of the internal regulations of the courts. The occasion was the incident in the Central court of St. Petersburg when the lawyer Lydia Holodovich failed to achieve a pass in the court of the witness due to the fact that he came in shortened pants. In the end, brought a criminal case already on Holodovich, but she stood up for the Federal chamber of advocates (FCA), who asked the justice Ministry to check the legality of the actions of the guards.

Now the courts are guided by rules of conduct that claim their chairmen on the basis of the model document developed in 2012, Judicial Department at the Supreme court. Rules govern access mode, the conditions of work in the court of the media and require visitors “to observe the established procedure of court activities, and standards of conduct in public places.” But some courts go further: for example, in the Moscow Arbitration court, according to eyewitnesses, do not let people in sport and cropped pants, and girls in too short according to the bailiffs, dresses (allowed length is no more than 10cm above the knee).

According to Momotova, new rules of behaviour of visitors in the courts must not only specify the requirements for their dress code, but also to answer other questions related to the stay of citizens in court buildings.

The President of the FCA Yury Pilipenko glad that the judges responded to put the FDA questions, but I’m not sure yet what will be the result sought by community law. Therefore, the FDA will insist that to participate in the development of regulations, he promised.

Dreadlocks, kimonos, turbans — who insulted the modern fashion and why

Member of the presidential Council on human rights (HRC), Leonid Nikitinskiy also believes that judges are not allowed to set their own rules for visitors, this document should be widely discussed. According to him, during the monitoring of openness and accessibility of the courts held under the auspices of the HRC, were found the characteristic as a whole for the system problems. Among them cautious or negative attitude of court staff to the presence of the public, restricting access to public meetings out of hours (so, the meeting of the courts of protesters in St. Petersburg in September could not get even the lawyers). In addition, restrictions on photo and video filming in the court building apply not only to the process itself, but also on areas of public access. According to Nikitinsky, experts have already prepared a proposal expanding the right visitors.

Chairman of the Board of judges of Sverdlovsk region Elena Milyukhina said that judges are familiar with these proposals, but not all agree, because, in fact, court visitors are invited to extend procedural rights and obligations, which is impossible. Although a certain logic in such initiatives are, they can be discussed, she concludes.