Ushakov: trump himself approached Putin at the G20 summit

Conversation of presidents Vladimir Putin and Donald trump “on his feet” during the G20 summit occurred after the American leader himself approached the Russian. This was announced by Putin aide Yuri Ushakov. 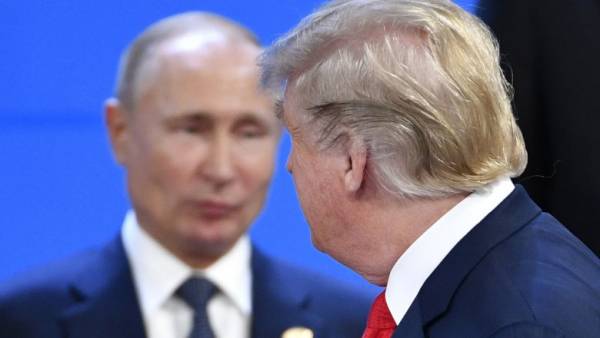 According to him, the conversation took place at a reception in honor of leaders of the countries participating in the G20 and lasted 10-15 minutes. Discussed only the conflict between Russia and Ukraine in the Kerch Strait and the overall situation in Ukraine, Ushakov said, adding that “can not reveal everything.”

Our President detail as can be had for 10-15 minutes, explained our assessment of the incident and the US President listened carefully to our arguments.Yuri Useconomic of the President of the Russian Federation

For the Kremlin’s refusal trump from the full length of the meeting was “a slap in the face” and did not cause resentment, said Putin aide. The Russian side is ready to talk, he said, but to beg or to be imposed will not be.

“Now the Americans have themselves to swing and something to offer. Think so,” — said Ushakov.News

Peskov commented on the handshake of Putin and Saudi Prince

Full meeting of Putin and trump at the G20 summit was to be held on 1 December. But on November 29 the President of the United States canceled it. He explained this decision by saying that it would be better for all parties concerned, as Russia after the conflict in the Kerch Strait has not returned to Ukraine sailors and ships.

The ceremony of photographing of the leaders of the G20 November 30, Putin and trump didn’t say Hello. Later that same day, Sands noted that they still shook hands, but the opportunity to talk they had.

On December 1, the Kremlin announced a “short contact” between the presidents. Putin at a press conference following the summit announced that he had a conversation with a tramp “on his feet”.

I answered his questions related to this incident in the Black sea. He has his own position on these issues, and I have mine. We remained unconvinced, but at least I informed him about our vision of this incident.Mr Putinprime of the Russian Federation

The white house said that trump had “informal conversation” with Putin on 30 November, and noted that “typically for multilateral activities.”

The conflict between Russia and Ukraine in the Kerch проливе19:34 (GMT)In Europe think about the expansion of anti-санкций18:28 (GMT)Kyiv was declared wanted by the eight Russian citizens involved in the arrest of Ukrainian моряков17:19 (GMT)Poroshenko called the detainees in Russia sailors военнопленными8фотографий8фотографий8фотографий