To whom we owe the existence of the reality show

From football to the pirate radio stations and directly to billion dollar media Empire: how to live the man who said all the top reality shows of today. 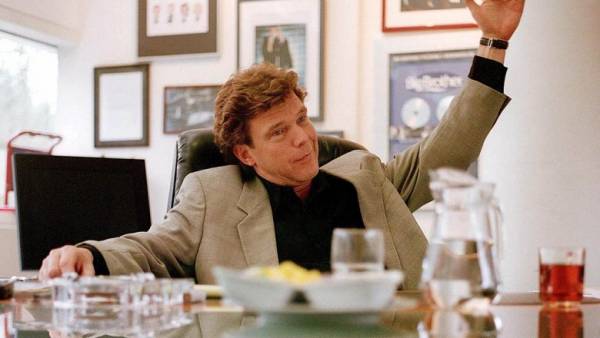 Dutch television producer John de Mol went from being a technique to pirate radio to the owner of a media Empire and a billionaire, having made a fortune on a reality show. Created by de Mol franchise “Big Brother”, “star Factory” and so Russian favorite show “the Voice” have often been criticized, and in some cases become objects of scandals and threats of lawsuits, but in spite of this, at different times, has climbed mountains celerating, turning de Mola in one of the largest media magnates of the world.

The study of the entertainment industry. samizdat asked the journalist Artem Andronov to reproduce the biography of the man who gave the world one of the main TV formats is being.

Football and pirate radio have been two major pop-cultural phenomena of the Netherlands the early ‘ 70s. while the Amsterdam “Ajax” and the Dutch team have been churning out victory, Veronica, Radio Nооrdzee and other pirate stations were carrying a new sound in the stuffy world of the official radio. The trends of the era are closely intertwined in the life of Hendrikus Johannes Hubert de Mol (John de Mol, Jr.).

The curly-haired teenager from the Hague loved football and dreamed of becoming a player for Ajax, but at the age of 17 realizing that his dream is in conflict with reality, put an end to his sports career. So he got a job on Radio Noоrdzee — popular pirate station that broadcast from the waters of the North sea. The father of future media magnate, known in the Netherlands, a musician himself, de Mol in the biographical article for the NY Times characterized as the “Dutch Frank Sinatra”, was the General Manager of the station and helped her son get into a team project. “I was delighted with the atmosphere, — says de Mol. The father wanted I continued studying and became a lawyer or something like that, but all my thoughts were only on radio. So I didn’t go to College.”

After the Dutch government officially banned the pirate radio station, Radio Nооrdzee stopped broadcasting, and de Mol started his career on TV, first mounting reviews of matches of the championship of Holland on football for a TV show Studio Sport, and then the broadcasting company TROS, where up to twenty-three years he worked as a production assistant.

The first six months I hated TV, but one day everything changed. We were working on the show “Miss Netherlands”, when I felt this strange nervousness I felt “butterflies in the stomach” and realized that in ten minutes the stream will look. From that moment I fell in love with TV.John de Mrinterview Variety

In 1979, thanks to the financial help of a family friend Willem van Kotena, the future media Mogul founded his own independent company John De Mol BV and took up their projects.

The first years the company lived extremely modestly, but after the success of the soap Opera Medisch Centrum West (TV series about the lives of doctors was a huge success in the Netherlands, broadcasted in many countries from Norway to Turkey, and in Spain and Germany there was a local adaptation of the show) and sale of a number of other projects in major European countries, the situation has changed.

Company de Mol was interested in his rival — Dutch theatrical producer and media tycoon Joop van den ende, and in 1994, the business held a merging, founded the company Endemol, which became the largest independent producer of television content in the European market. In 80-90 the development of pay-TV in Europe and the emergence of new channels has expanded the niche for producers, and a young company, seeking to fill it, he began developing generic formats show for sale at the national television markets. Despite the merger, the company continued to remain Autonomous and existed as a partnership of competition. It took five years and Endemol have created the first truly global hit.

We sat in front of monitors in a nearby house and could see everything. It was incredible. For two nights we barely slept, because literally stuck to the screen. And what did we see? Sitting on the couch and just talking to each other people. At that moment we realized that working on something special.Gender Reservasi producer Endemol

The idea of the reality show Big Brother (“Big Brother” — probably a reference to George Orwell’s novel “1984”. Later relatives of the writer has filed a lawsuit against the creators of the show, but the conflict was settled prior to trial) originated in September 1997, the year when, during a brainstorming John de Mol remembered with producers Endemol Patrick Chalice and brothers Paul and Bart Remerani about a failed scientific experiment, Biosphere 2 (whose members lived in a closed transparent space), and then they began to discuss it, then gaining the popularity of the new gadget is a webcam.

The producers quickly came to the idea: “People are under constant surveillance”. Originally, the creators planned to call the show “the Golden cage”.

media calculated how many stars and billionaires earn per hour

The project had to live for years under the sight of cameras in a closed Villa and reach the final, the participants would receive a prize of one million Dutch guilders, but in order to save the duration of the show was reduced to one hundred days, and the prize amount — up to 250 thousand guilders. Instead of a Villa of the heroes decided to settle in a specially built house in Almere.

“Big Brother” aired on 16 September 1999 and instantly became a phenomenon. The average releases of the first season I watched one and a half million Dutch viewers, and the finale 30 Dec 1999 in live watched three and a half million people (about 20 percent of the population of the Kingdom of the Netherlands). The huge success of “Big Brother” has attracted the attention of broadcasters around the world, and as of the end of 2017, despite the contradictory wave of hype, plenty of debate about the ethics of the show and the scandals around it, the project was adapted in 54 countries and regions (including in Russia), among which the main TV market in the world — the United States, which is currently aired 20 seasons.

“George Orwell was a loser,” said with sarcasm the author of the New York Times in an article devoted to the premiere of the first season.

“The day of the big stars pass. We proved that ordinary people can be just as interesting, and the audience think the same,” spoke about the success of the project itself is de Mol.

Contrary to the misconception, “Big Brother” was not the first reality show in history. At that time there was already an American An American Family and The Real World (“Real world”), the Swedish Expedition Robinson (survivor), the Dutch “Room 28”, as well as certain experiments in this genre were set by the Japanese, but it is the project of Endemol became the first reality show that truly went off: it was broadcast live 24 hours a day, it was the first show, so effectively using the Internet.

The website of the Dutch version of “Brother”, which was organized around the online broadcast, only three months of its existence, has garnered over sixty million visits. “If ten years later you ask, what legacy is left behind “Big Brother”, the answer is that this show has accelerated the process of mutual integration of television and the Internet,” said Roemer in late 1999.