“Against the background of Putin, trump — Amateur”: what they say in the US about the G20

U.S. experts assessed the significance of a possible meeting between Putin and trump at the G20. 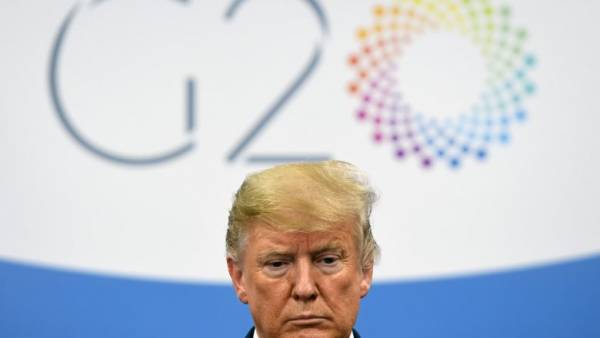 Russian President Vladimir Putin and U.S. President Donald trump could still meet on the summit of “Big twenty”, however, if such a meeting takes place, it will be short. If any meeting of the two presidents are unlikely to bring improvement in the relations between Russia and the United States, assured the interlocutors “Газеты.Ru” in Washington, DC.

That both presidents can speak format, “the legs”, said the press-Secretary of Russian leader Dmitry Peskov. But the White house denied even the format of the meeting. “A conversation on the sidelines is not planned”, — said the American media, the White house spokesman.

At the meeting at the opening of the G20 summit, the presidents did not even shook hands, immediately turned his attention the world media.

However, as is often the case with trump, everything can change at the last minute — the American President is known that dramatically changes the solution.

Planned on the sidelines of the G20 meeting trump canceled at the last minute, and the next day he said that he still wanted to meet with Putin.

The reason for the cancellation of the full meeting, at which the parties planned to discuss a range of bilateral and global problems, was the incident in the Kerch Strait, when the Ukrainian ships entered the territorial waters, was stopped by border guards of Russia with weapons. The crew of the ships were detained by Russian troops.

Trump said that he was unhappy with the situation. According to him, this incident caused the cancellation of the official meeting.

The incident in the Kerch Strait has seriously affected the atmosphere in Washington.

The Chairman of the Committee of the lower house of the US on foreign Affairs ed Royce, called Russia’s actions “aggressive” and expressed his confidence that they were made on the orders of senior Russian leadership.

About this Royce said during a meeting with Russian journalists, among whom was the correspondent of “Газеты.Ru”. The Congressman talked only a few minutes, and his statements swirled only around a few points.

The only way out he believes the release of the Ukrainian seamen. “If this happens, it can lead to additional sanctions,” he said.

Royce comes from the fact that the US have the right to intervene in such conflicts for the sake of global security.

The Congressman did not even directly answer the question “Газеты.Ru” whether it is to discuss the trump and Putin. Instead, he reiterated the view that Ukrainians should be given the freedom.

Royce did not run for another term and will soon leave Congress. However, while he remains the politician, whose opinion in matters of U.S. foreign policy is significant. The politician’s wife Marie Royce recently got a job at the state Department.