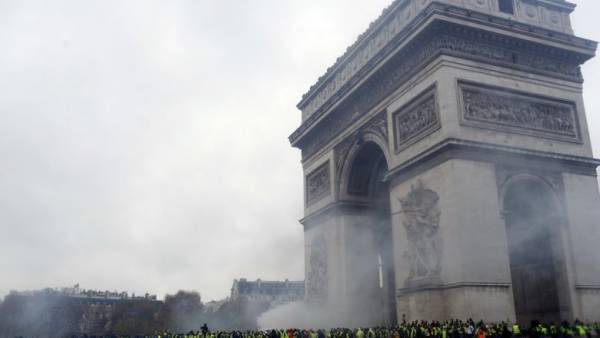 The police began to detain participants of the movement “Yellow jackets” in Paris Moscow. 1 Dec. INTERFAX.RU — According to the French interior Ministry, in the Champs Elysees area gathered 200 peaceful demonstrators, but the approaches to it are counted about 1.5 thousand less friendly-minded people. Upstairs French officers carried out Saturday detentions of demonstrators from the movement “Yellow jackets” in the Champs Elysees area, Paris transfer media. According to the interior Minister Christoph Costanera, there were 200 peaceful demonstrators, but on the outskirts of the Champs Elysees, according to the Minister there were about 1.5 thousand less friendly-minded people trying to provoke police officers. Individuals attacked #Macron’CRS regime s police bus at Place de l’etoile in #Paris. People resist higher taxes nationwide against police brutality and#YellowVests #France #ChampsElysees #GiletsJaunes #resistance #1erDecembrepic.twitter.com/CBAdFipbmK — The Hawks (@TheHawksOps) 1 December 2018. Meanwhile, in Paris…#ChampsElysées #GiletsJaunespic.twitter.com/xYkKRPvvKj — p4z (@_p4z_) 1 December 2018. “Our

END_OF_DOCUMENT_TOKEN_TO_BE_REPLACED

The passenger took off, an Airbus 320 began to fall off the engine covering MOSCOW, 1 Dec — RIA Novosti. The passenger of the airline company Frontier Airlines has removed on video as during the flight the aircraft loses an engine covering. UpstairsDuring the download an error has occurred. According to the publication USA Today, the Airbus 320 took off from the airport of Las Vegas to Tampa on Friday around 7:00 local time (18:00 GMT). However, after a few minutes after takeoff, the passengers noticed that the engine leaves the siding and reported this to the flight attendants. Because of the incident, the aircraft returned to the airport Mac Curran in Las Vegas. On Board were 171 passengers and six crew members. None of them was hurt.

END_OF_DOCUMENT_TOKEN_TO_BE_REPLACED 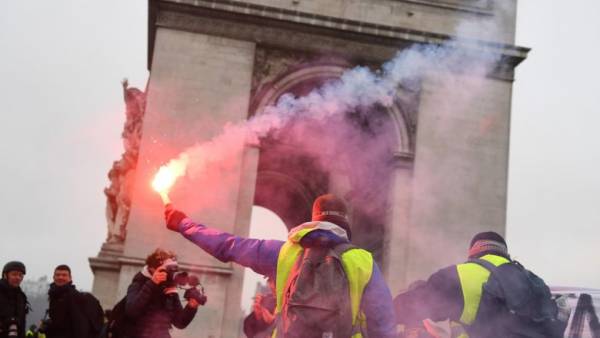 In Paris, police used tear gas against protesters MOSCOW, 1 Dec — RIA Novosti. The police used tear gas during the ongoing Paris action against rising gasoline prices, according to the channel LCI. Upstairs Mass protests of the movement “yellow jackets” began in the country on November 17. Last Saturday they attended more than 100 thousand people. In Paris, the demonstration was accompanied by riots on the Champs Elysees. According to TV channel, clashes with law enforcement occurred at a drugstore Publicis near the square, the arc de Triomphe (Etoile). The demonstrators tried to seize the checkpoint at the entrance to the area to protest. One person was detained. “Dites-le avec des fleurs “.#GiletsJaunes #1erDecembre pic.twitter.com/kGnKNFa7QP — ????. (@AvansTweets) 1 December 2018. As reported by channel BFMTV with reference to the capital of the Prefecture of police, two more people were arrested for illegal possession of weapons. Because of the

END_OF_DOCUMENT_TOKEN_TO_BE_REPLACED 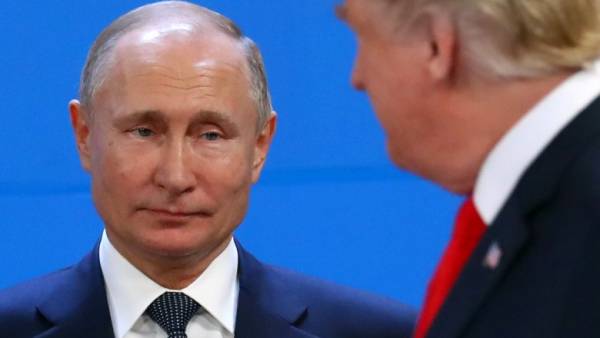 Putin and trump did not greet each other at the G20 Moscow. 30 Nov. INTERFAX.RU — the Russian leader warmly greeted the crown Prince of Saudi Arabia, who was his roommate at the plenary session of the summit. Upstairs Russian President Vladimir Putin and U.S. President Donald trump before the photographing of G20 leaders in Buenos Aires did not greet each other. The ceremony photography from the press centre watched dozens of journalists. Putin was on the podium for photographs before American colleagues, trump passed him by. #G20 leaders including @realDonaldTrump and @JustinTrudeau pose for the traditional “class photo” group shot MORE:https://t.co/uK9I6su7ro pic.twitter.com/EXsqdD5kYT — Globalnews.ca (@globalnews) November 30, 2018. Then the heads of States of the “twenty” proceeded to the hall for the first plenary session. Putin was one of the first, away from him — the President of the United States. In the hall “plenary” Putin warmly greeted the

END_OF_DOCUMENT_TOKEN_TO_BE_REPLACED 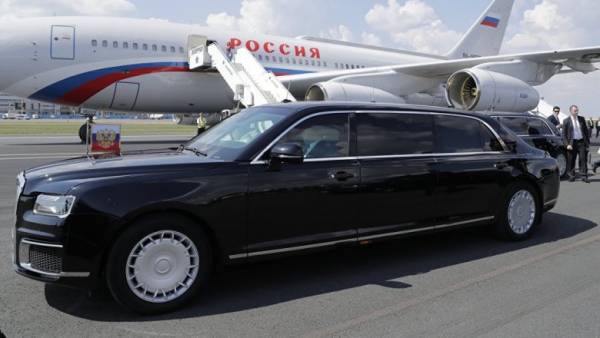 Argentine media called the limo Putin “bin on wheels” BUENOS AIRES, 30 Nov — RIA Novosti. Argentine media discuss the four “beasts” — the limousines of presidents of Russia and the USA, which arrived together with their owners in Buenos Aires for the G20 summit. Upstairs Both machines, the local media called “Bestia”, which translated from Spanish means “beast”. Limousine Putin TV channel TN is considered to be “a real bunker on wheels” — it can withstand bullets of large caliber and even the impact of the explosives, all the parts of the machine are top secret. In Argentina, Putin brought the car Aurus. All your take: how presidents travel How did the fateful negotiations of the leaders of the two powers The distinguishing characteristics of armored car trump the newspaper Clarin said her weight is 7 tons and the ability to withstand chemical and biological attack. See also: Premier

END_OF_DOCUMENT_TOKEN_TO_BE_REPLACED

In Dagestan have repaired the first school under the project “100 schools” “The parents are happy and children, too,” — said the newspaper VIEW Shamil Ibragimgadzhiev, Director Maleevskoy SCO, which has become a pioneer in the completion of repair work taking place in the framework of the program “100 schools”. Upstairs “We got a spacious, comfortable classrooms. Tomorrow we will hold a gas, the school acquired a modern look, the parents are happy and children, too,” — said the Director Maleevskoy SCO Shamil Ibragimgadzhiev. Mazewska high school kizilyurtovsky district of Dagestan became the first school completed renovations in the framework of the project “100 schools”, according to the portal “Bezformata”. The building was built in 1992 and has long needed major repairs. Through participation in the project “100 schools”, the building was made complete replacement of the heating system (before the building was heated with wood and coal with solid

END_OF_DOCUMENT_TOKEN_TO_BE_REPLACED

In the Ulyanovsk region opened a free school for older people “The main subject we photograph. It learn how to work with light, with the scenario of shooting. Retirees mostly take pictures of their cats, dogs, nature and of course their relatives”, — told the newspaper VIEW organizer “Fotoshkola 55+” Marina Kazakova, which opened in Ulyanovsk. Upstairs Earlier it became known that in Ulyanovsk opened a “Fotoshkola 55+” for older people. For the first time in the region has created a free creative Studio where people 55 years and can try yourself in the role of a photographer and a model. With students engaged in free photographer, stylist, makeup artist and a psychologist. Participants of “Photoschool 55+” get the opportunity to go on nature, to take pictures of scenic spots, to participate in workshops on stage make-up, posing, workshops and competitions on photography. “Now — the final stretch of our

END_OF_DOCUMENT_TOKEN_TO_BE_REPLACED

Have famous in network, a gigantic bull appeared competitor In Canada, we found a competitor who was renowned network giant ox named Nickers (Knickers). As informs edition Daily Mail, a bull named dozer (Dozer) above the Australian congener of 2.5 cm. Upstairs In late November, the media drew attention to the ox (castrated bull) of Nicera. His height is 194 cm, allowed the animal to avoid the slaughterhouse. The farmer and the owner of the animal shelter near the canadian city of Winnipeg, Manitoba, Sanroc Carl (Karl Schoenrock), said that he sees no reason to admire Nickerson, as his bull even more. The growth of six-year-old animal is 196 centimeters. Published by Kismet Creek Farm Thursday, November 29, 2018During the download an error has occurred. Shenron described the Dozer as a “gentle giant” and noted that “there is nothing wrong, other than the size.” As Nickers, dozer was born on

END_OF_DOCUMENT_TOKEN_TO_BE_REPLACED 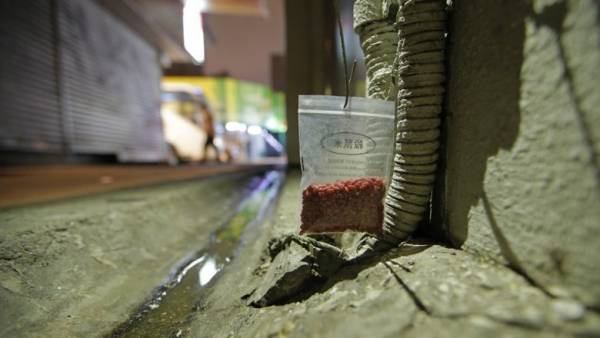 In Kazan three student poisoned with rat poison KAZAN, December 1. /TASS/ — the Children found the poison pellets in one of the school premises and tried it. Upstairs The Prosecutor’s office began an investigation after poisoning three pupils of one of schools of Kazan. On Saturday I reported a press-service of Prosecutor’s office of Tatarstan. “The Prosecutor’s office of the Aviastroitelny district of Kazan checks on the fact of poisoning of pupils of one of city schools. The Supervisory authority finds out circumstances of the incident and contributing causes and conditions. According to the results of verification activities will be given a legal assessment of the actions of the responsible officials”, — stated in the message Department. As explained to journalists the head of the press service of the Prosecutor of Tatarstan Ruslan Galiev, poisoned girl and two boys. The poison in the pellets found the girl in one