Biologists noticed that predatory insects praying mantises, the usual victims are other arthropods, have started to include in your diet fish. Early biologists did not notice the mantid such behavior. Job description new tactics hunting insects published in the Journal of Orthoptera Research. 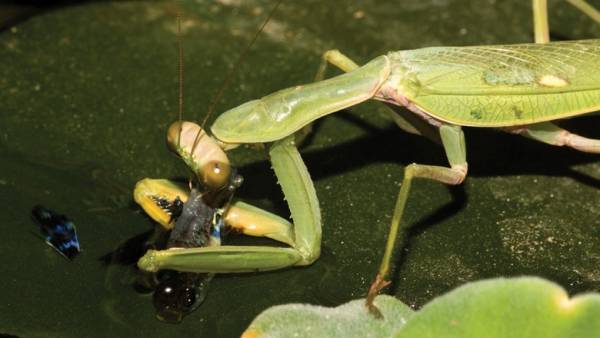 Previously, scientists had received eyewitness accounts that praying mantises are hunted not only for arthropods, but also on vertebrates such as small birds, lizards, frogs, newts, mice, snakes, and turtles. However, in most cases this information is either not confirmed or occur in environments with a large influence, for example in laboratories.

In the new work, the biologists describe how the praying mantis preyed on fish guppies in conditions close to natural in a pond in India. The mantis was returned for five consecutive days and a total of nine enjoyed the fish. The authors note that this is the first such message in the scientific literature.

In addition korisnost, this observation leads to three conclusions. First, it proves that one species of invertebrates can affect the entire ecosystem, so how do guppies eat water insects. Secondly, it speaks about the abilities of the mantid to hunt in the dark, while the structure of their eyes clearly indicates adaptation to day-time hunting. Thirdly, this fact may indicate that mantises are able to study. The authors suggest that the re-emergence of the praying mantis of the pond — this is a consequence of personal experience, and unusual hunting tactics says developed cognitive abilities.