A young Kyrgyz sang in a bra. Now she is threatened with death

Music video young Kirgiz, in which she appears in a jacket draped over Lacy underwear, stirred up in social media discussions on the law of the Kyrgyz women to Express themselves. 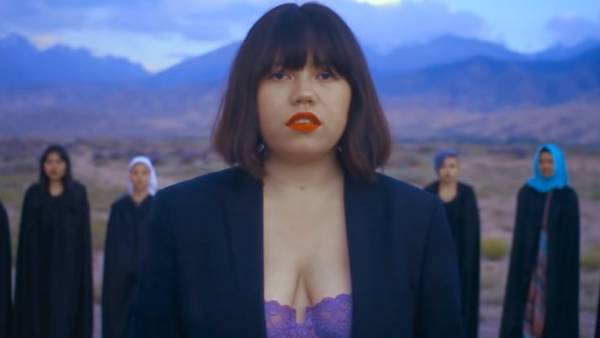 In the song “Kyz” (girl) 19-year-old Asylbek zere sings that no one should tell girls and women how to behave and what to wear. With her in the clip the girls in different outfits — hijab and traditional Kyrgyz dresses to swimwear.

This is the first song zere. The track was released two months ago, but actively discuss it only started with the advent of the clip. Those who support zere, photographed in their underwear, posting photos on “Facebook” and noting that “in a Patriarchal society have to get naked to assert their rights.”

Others threatened the singer with violence, claiming that Kyrgyz girl to look like that are not supposed to. She posts screenshots of the threats, including the promise to “cut off the head”.

Zere wrote a statement to the police, the interior Ministry said that will do everything necessary to prevent attacks.

While most of the discussions concern not the content of the song, and the figures zere. Among commented on her body was even former Prime Minister Felix Kulov, who interceded for the girl, but said that “if the figure girls were perfect, the clip would not cause such a stormy debate”.

Zere also leads the children’s YouTube channel for English language learning plays in the theatre and working as a DJ. According to her, she specifically sings in Kyrgyz, as it primarily focuses on girls living in the regions in the strict framework of a Patriarchal society:

Almost 90% of girls in Kyrgyzstan and around the world, including me, faced discrimination on the street, work or at home. I wanted to write you this song on behalf of girls — one of which I am. Initially thought to apply to poets (as in Central Asia called the songwriters), and then decided to write about his own experience, so the song came together.Teleinterview, “Radio Liberty”

According to her, she decided on a provocation to start a discussion of women’s rights in society.

“Such a violent reaction was expected, I knew that it was so in the video I will be able to excite the society,” said zere.