Beauty is a monster. Ugly beauty as a new super-successful concept

The transformation of the concept of beauty is invisible and in front of us: more recently, the valued beauty of the top models of the 90’s, and today we are witnessing the opposite process. 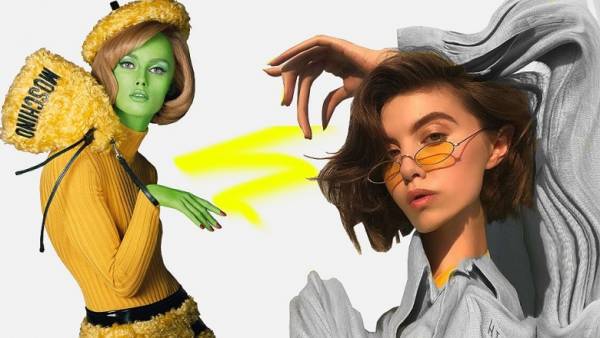 Yes, once, and Cindy Crawford admitted was not perfect — early in his career, the agents advised her to lose weight and to get rid of moles. Kate moss with the proverbial good looks of a teenage embodiment of heroin chic looked like a flyspeck on a background of luxurious Christy Turlington and Helena Christensen. The same Linda Evangelista could not see the movers and shakers of the fashion business, and in the first years of her modeling career she languished in obscurity — no one thought her beautiful. Nevertheless they all became superstars. These exceptions prove the rule, which today is an oxymoron:

Beauty is no longer needed, the ball is ruled by ugliness and redundancy. Advertising campaign fashion brands also began to reflect this new reality.

From the last autumn campaign VB Victoria Beckham: a great branded package with out protruding a parts of her body remind of the revived “Bush legs”. For the fashion circles is a beautiful homage to the ad campaign of Marc Jacobs in 2008, which starred then budding designer Victoria Beckham. For the General public — the strange frames that don’t tally with the fact, what kind of clothes does and wears Victoria herself. The network began a flash mob — all photographed in packages of different shapes and colors, and it looks very funny.

Zac Posen decided to put their models in a very strange atmosphere: the interiors are painfully reminiscent of Soviet apartment, and the models themselves — messy, somehow dressed as if taken by surprise by their inhabitants.

But the most distinguished of Italian Vogue — my latest fashion shoot stylists of the magazine held in the Russian province, in the Arkhangelsk region. And the choice of location is not the most amazing. Much more interesting to look at characters shooting models with a fake mustache, bleached faces and in unnatural positions.

Artist Maxim Goshko-Dankov sees such manifestations of blatant ugliness of a massive trend:

Ugly style is the coolest incarnation of the beauty and fashion industry. This is due to the mass penetration of design and art to a wide audience. So we have not “ciklama” on a niche audience that could understand a particular product, and look much wider. The product should be besides that very noticeable, but should, in turn, to break stereotypes — in order to cause genuine interest of the audience, otherwise it will be boring.

You can agree with him or not, but what was previously considered ugly, today won the hearts of millions. It seems that nobody wants to miss.